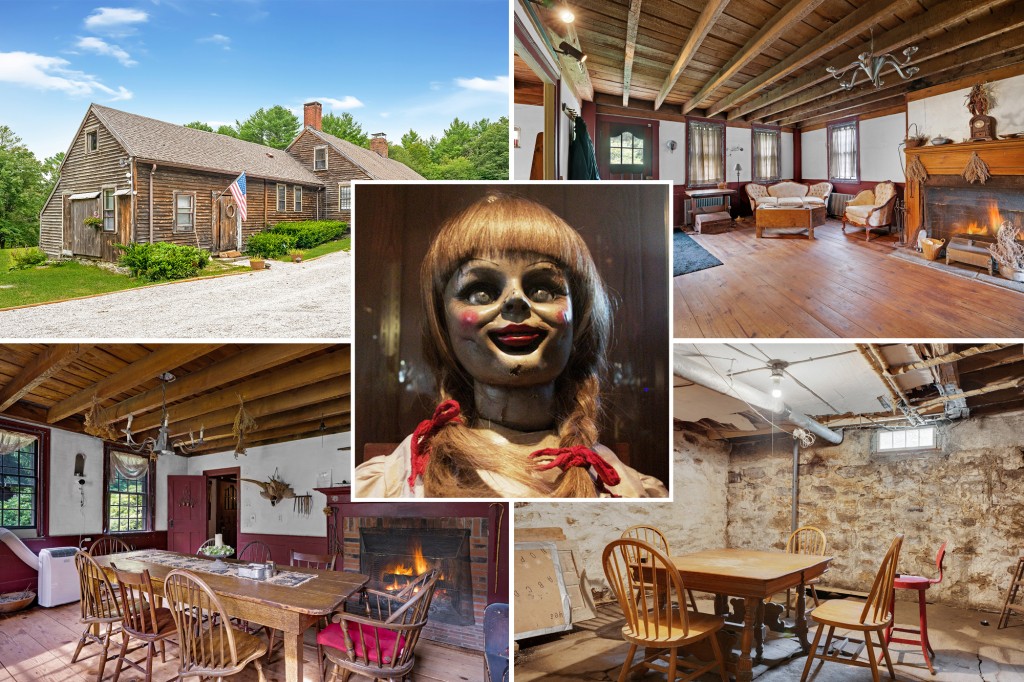 This house is boo-tiful!

Onlookers of this just-listed three-bedroom home in northern Rhode Island may get a scream out of its charming rustic details, such as wood-beamed ceilings, a number of fireplaces and wide-plank wooden floors.

But they’ll really shout when they learn the property, asking $1.2 million, is actually “The Conjuring” house — the real-life haunted house that inspired the 2013 horror movie of the same title — the listing brokerage told The Post.

Located at 1677 Round Top Road in the town of Burrillville, the Wall Street Journal first reported the news of the roughly 3,100-square-foot home hitting the market, adding that its owners, Jenn and Cory Heinzen, had encounters with the spirits who also lived there. After buying it for $439,000 in 2019, the pair spent four months keeping to one downstairs room as “a sign of respect for the spirits, letting them get used to us instead of barging in,” Cory told the Journal.

And then they received a welcome from a full black-colored apparition that peeked at them from the doorway of that room.

“Once we realized we were both awake and both seeing it, it was gone,” he told the paper.

“The Conjuring,” now a franchise of horror films, is based on the accounts of the Perron family, who lived in the farmhouse in the 1970s, though the original movie didn’t shoot there.

Carolyn and Roger Perron, plus their five daughters, moved in during that decade and noticed bizarre occurrences — including early-morning bed shakings, odors of rotting flesh and a broom moving by itself from place to place. Andrea Perron, the couple’s eldest daughter, reportedly said the seller hadn’t disclosed the home’s history of murder, suicide and rape. The listing notes the property is rumored to be haunted by the ghost of Bathsheba Sherman, who lived there in the 1800s.

The Perrons called upon paranormal investigators Ed and Lorraine Warren in 1973. And what they are said to have experienced — including finding the family’s dog dead in the yard after it refused to go inside — inspired the films.

The Heinzens, who are paranormal investigators, previously told news outlets of other freaky occurrences that allegedly took place in the doomed domicile in the wake of their purchase.

The couple’s daughter, Madison, has also reportedly witnessed haunted happenings there — telling her TikTok followers that she’s seen a ghost inside the “Conjuring house.”

“I was eating dinner by myself and I saw someone run by me,” she said in a video. “I caught it by the left corner of my eye, and all I saw was a veil and a skirt and it just vanished into thin air. This had all happened in a span of three seconds, and I just sat there in complete disbelief not knowing what to do.”

And once, a lead investigator for the Travel Channel’s “Ghost Adventures,” Zak Bagans, said exploring the property left him feeling sick.

“It took everything out of me,” he told People. “My body wasn’t functioning right. My balance. This place is haunted by something I believe is very ancient.”

The home dates to 1836 and stands on an 8.5-acre lot, according to the listing, which adds that there’s one full bathroom and one powder room inside as well. Beyond images of built-in shelving and wooden cabinets in the kitchen — there are also cheeky images showing spooky-looking dolls on a chair and inside the case of a clock, as well as a generated image of crows flying over the spooky spread.