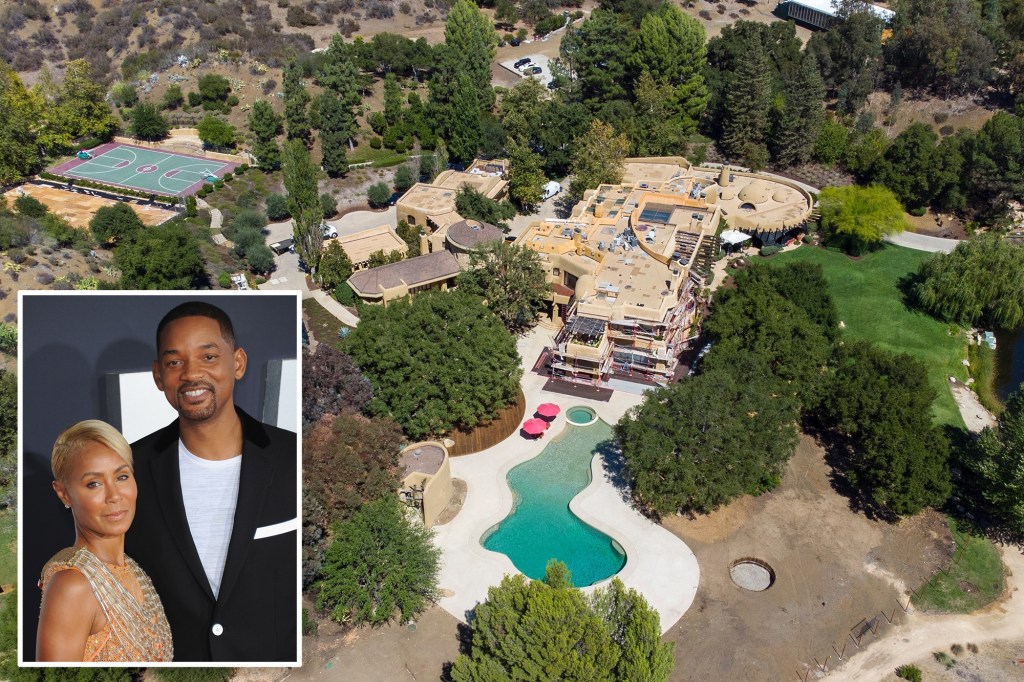 A basement fire can’t stop Will Smith’s “Pursuit of Happyness.”

Smith’s massive Calabasas mansion is under renovation after a fire broke out at the $42 million family home he shares with wife Jada Pinkett-Smith that caused smoke damage, The Post can exclusively reveal.

Next to a remaining basketball court, what was once a tennis court has been stripped to the studs, exclusive photos show.

And red scaffolding now hugs the southernmost tip of the more than 20,000-square-foot main house next to the deck, outdoor barbecue, pool and hot tub.

The Smith’s were home at the six-bed, 13-bath compound when the basement fire broke out on Monday, Sept. 20, but there were no injuries or hospitalizations, Page Six reported.

“They are all fine and in the home. A fire broke out in the basement, and a fireman was treated, but everyone is fine,” a source close to the family exclusively told Page Six. Will Smith’s representatives did not respond to The Post’s request for comment about repairs.

The basement fire broke out in the 1,750-square-foot lower level of the home. Little is known about the basement except that it was designed to contain a gym, according to floor plans from 2001.

On the first floor, the scaffolded area of the house contains the family room and the kitchen, which has an island, a large pantry and a breakfast room with large windows, floor plans show. It is unclear if the smoke damage extended beyond the basement.

On the second floor, the scaffolding is affixed to the primary bedroom suite, which permit records show has a spa-like bathroom, a large dressing room, and a private garden and terrace, which are visibly covered by scaffolding.

Highlights include a bowling ally, an atrium with a bar, a recording studio, a tea house, a crafts room, a potting room — you have to cut flowers somewhere! — and a cinema wing, floor plans show.

The cinema wing, which is on the opposite side of the main house from the fire, has “media storage,” a projection booth, a screening room, men’s and women’s restrooms and an “accolades lounge,” floor plans show.

The first floor also has a library, a dining room and an office, floor plans show. Upstairs, there are also several guest suites, an exercise room and a steam room.

Affixed to the main house — and close to the site of the fire — is a circular structure that, from an aerial view, appears to have a hole in the top. Floor plans show that that is the recording studio, which is where Willow, 20, reportedly recorded the audio for her 2010 hit “Whip My Hair.”

Attached to the studio is an approximately 2,000-square-foot garage and a two-suite guest house.

Behind the house, a pond with a small island is graced by a tea house gazebo. The property also has a 11,650-square-foot gymnasium with a greenhouse, a bowling lane, a steam room, a pool, a dressing room and a spa, according to permit documents.

The reportedly 150-acre property contains at least 70 acres of open space the Smith-Pinkett family dedicated to public access and conservation. This includes streams, woods, more than 100 oak trees, shrub areas, freshwater marsh areas and a 20-foot wide public hiking and equestrian trail, according to the 2001 proposal to develop the property.

This hasn’t been the family’s first fire scare. Smith and his family evacuated the Pueblo revival-style home in November 2018 due to the Woolsey wildfire.

The stucco home, which was designed by Stephen Samuelson, was recently the site of Pinkett’s 50th birthday celebration, for which the family constructed a roller rink and had food trucks.

Though the “I am Legend” actor considered selling the house in 2013, he has since decided to keep it. It has become the location where Pinkett-Smith shoots her popular “Red Table Talk” show with daughter Willow and mom Adrienne “Gammy” Banfield-Norris.

The 52-year-old “Fresh Prince of Bel Air” actor and Jada Pinkett share two children: 23-year-old Jaden and Willow. Smith also has a 27-year-old son, Trey, from his prior marriage with Sheree Zampino. Smith’s net worth is unknown, but his earnings were at least $44.5 million in 2020, according to Forbes.