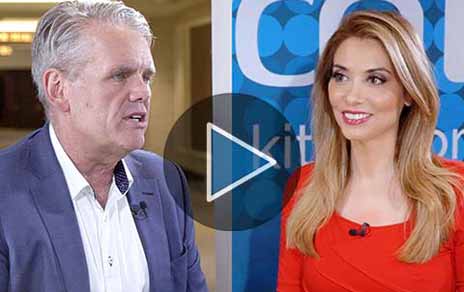 (Kitco News) – While industrial metals will continue to be in higher demand as the world shifts into a green energy paradigm, one metal stands above the others for Wheaton Precious Metals’ CEO, Randy Smallwood.

“It is truly the metal of the future,” Smallwood told Michelle Makori at the Denver Gold Forum, referring to silver.

“The push towards electrification…Copper, of course, is getting a lot of attention in this world, but silver is a much more efficient metal. It doesn’t take a lot of silver to make a big difference in terms of efficiency and energy around. That’s why you see it in solar panels, in high efficiency mobile phones, mobile electronics, and as those types of issues become more important to society, silver will play a bigger and bigger role,” he said.

The future of the platinum group metals (PGMs), and palladium in particular, rests on developments in the electric vehicle space, Smallwood said.

Platinum is a key component in catalytic converters and auto catalysts are one of the largest industrial uses for PGMs, accounting for 30% of total platinum industrial use in 2020, and more than 50% in prior years, according to data from Johnson Matthey.

“I’m a believer in electrification, there’s no doubt it’s the way to go, just for so many reasons. There’s no doubt that palladium, which is generally considered a catalyst, probably has a bit of a limited future. That being said, increasing environmental standards are probably going to drive higher demand for catalysts to impact from internal combustion engines,” he said.

For Smallwood’s views on mining, Bitcoin, and Wheaton’s latest updates, watch the video above. Follow Michelle Makori on Twitter: @MichelleMakori.