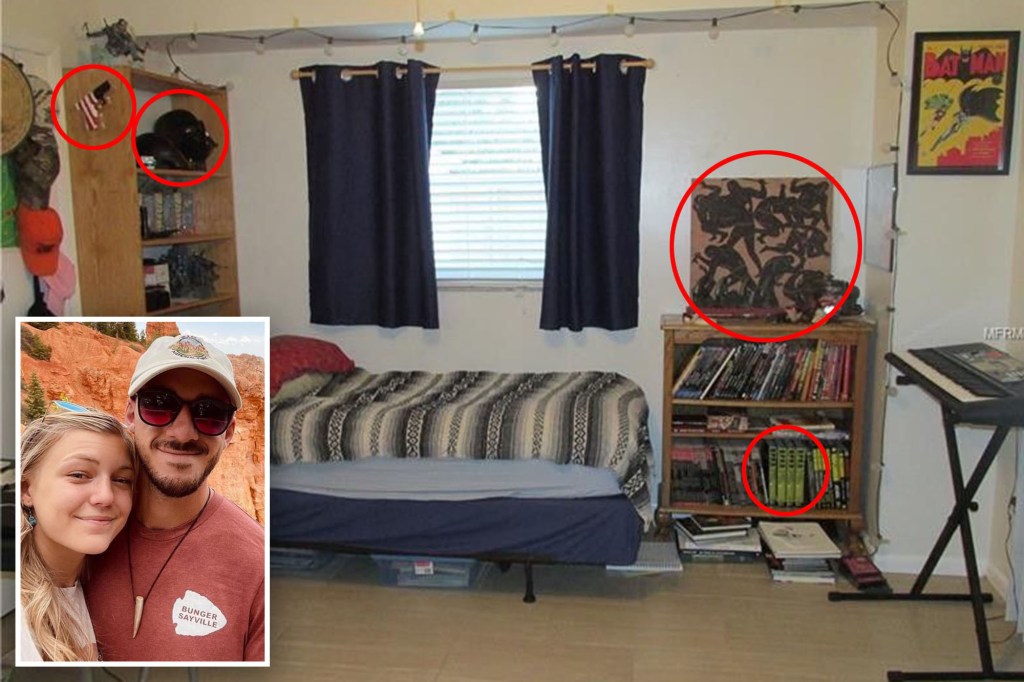 As authorities continue the manhunt for Brian Laundrie — and the public speculates wildly about his whereabouts — The Post has acquired property documents that reveal a string of recent home sales by the Laundrie family, as well as photos that take us inside the residence he shares with his parents.

Petito, 22, was on a cross-country trip with her boyfriend Brian, 23, when she disappeared there.

Autopsy results were scheduled to be released Tuesday — but Dr. Brent Blue, the Teton County coroner, told The Post no positive identification has been made. However, lawyer Richard Stafford has confirmed that the remains belong to the Blue Point, Long Island native, Insider reported.

Meanwhile, mystery swirls around Brian’s family after they went radio-silent Tuesday when their legal team canceled a press conference that was scheduled to take place in the wake of the FBI swarm.

After it was officially declared a crime scene, Brian’s parents — Roberta, 55, and Chris, 62 — were seen being pulled out of their home while investigators worked on collecting and tracking down evidence that might help explain his sudden disappearance.

The Post has acquired photos inside the family’s three-bedroom, two-bathroom home in North Port, Florida, which was purchased by the Laundries in 2015 for $120,000. Two years later, they attempted to list the home for $215,000, with a price reduction a month later. The Laundries took the home back off the market shortly after, in January 2018.

One of the images from the 2017 real estate listing takes us inside Brian’s presumed bedroom. A disturbing poster of dark figures with hammers and spheres violently attacking other figures can be seen resting on the two-case bookshelf.

Other items observed in the room include what appears to be a gun propped up next to the shelves over his bed, a Darth Vader mask and a series of “Watchmen” books.

According to DC Comics, “Watchmen takes place in an alternate world where the mere presence of American superheroes changed history: The US won the Vietnam War, Nixon is still president and the Cold War is in full effect.”

“It begins with a murder-mystery before unfolding into a planet-altering conspiracy: When a retired hero is killed, his former teammates must investigate. The conspiracy they uncover will entwine their secret traumas and twisted psychologies, ultimately asking where the fine line is drawn between heroes and villains?”

The rest of the home appears to be pretty standard and ordinary. Spanning three bedrooms and two baths, the property sits at a modest 1,448 square feet and comes with a small pool in the backyard.

But this isn’t the only home owned — or sold — by the Laundries recently.

Property records show they had also owned a Venice, Florida condo unit since 2015, which they bought for $99,500. They sold this property this summer for $144,000, after just two weeks on the market in July.

Brian’s mom, Roberta, can be seen pictured in one of the listing photos.

The photos of the listing show vacant rooms with no furniture or possessions.

Brian has been missing since Sept. 14, when he went for a hike in the 25,000-acre Carlton Reserve last week and never returned, his family told police.

Brian vanished shortly before police named him a person of interest in Petito’s disappearance on Sept. 17 — two days before the former Long Island resident’s possible remains were found in Bridger-Teton National Park, near where her white van was spotted late last month.

Petito last made contact with her family on Aug. 30.

Brian returned home to Florida without Petito two days later, on Sept. 1, retained a lawyer and refused to cooperate with authorities.

In the latest disturbing turn of events, Petito’s van was discovered in disarray from how it first appeared when Petito released a YouTube video documenting their cross country road trip.

The van showed some of their belongings messily strewn throughout the back of the camper after they were stopped by police in Utah following a 911 report of a domestic incident.

A police report from the incident depicted Petito as the aggressor — but it has since emerged that the concerned citizen who called 911 claimed to have witnessed a man “slapping” a woman.

“We drove by and the gentleman was slapping the girl,” the caller said, according to new audio of the call that emerged Monday.

The dispatcher responded, “He was slapping her?”

“Yes, and then we stopped. They ran up and down the sidewalk, he proceeded to hit her, hopped in the car and they drove off,” the caller replied.

On Tuesday afternoon, police revealed they are “actively” investigating deer camera footage that captured a hiker resembling Brian trekking through the wilderness.

A man named Sam Boss told investigators he spotted the man toting a backpack at 6:17 a.m. on Monday in the town of Baker, Florida — about 500 miles away from Laundrie’s home in North Port.

“I’m not saying this is the guy but whoever was on my trail camera this morning in Baker, [Florida] strongly fits the description of Brian Laundrie,” Bass wrote on Facebook. “Authorities have been contacted but people in the North West Florida area be on the look out.”

Petito’s distraught parents are withholding public comment on the case until they are reunited with their daughter.

“I want to personally thank the press and news media for giving the Petito and Schmidt family time to grieve,” lawyer Richard Stafford said in a statement. “We will be making a statement when Gabby is home.”