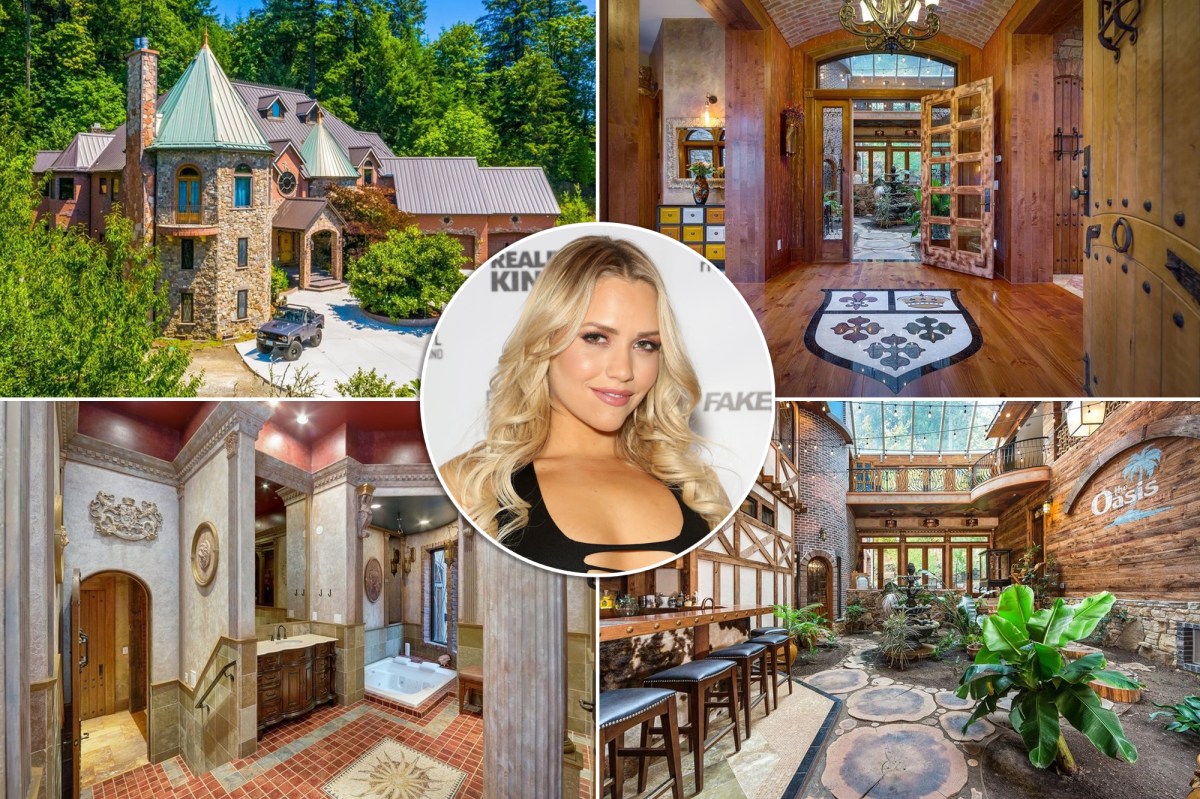 The $3.9 million Portland castle at 14125 NW Germantown Road will serve as a filming location for adult films, which will appear on YouTube, Instagram and Twitch. Producer Eli Tucker partnered with Malkova in the purchase.

“The fact that it’s a castle — that is my favorite part — that it is themed after a castle and has a fantasy theme. It is very eccentric,” Malkova, who has 7.4 million followers on Instagram, told The Post. She said the castle will serve as a set for PG-rated geek and gaming content, but “definitely adult [content] will be shot here” too.

The 13,000-square-foot mansion has five bedrooms and five and a half bathrooms, plus classic castle-like features, including turrets, suits of armor and family crests, according to the Realtor.com listing — but that’s only the beginning of its whimsical features.

The foyer’s floor sports a crest of arms mural, and through a heavy wood door — one of 70 that were custom built in and imported from Europe — a winding staircase is guarded by suits of armor. Above, a Michelangelo-like mural stretches across a domed ceiling.

“The doors have little medieval peepholes cut out that you can peek through and check what’s on the other side,” said Malkova.

As soon as you’ve entered the house, you are transported to a fantasy-like garden. A fountain, plants and a rock walkway create the feeling of entering a landscaped garden.

Look up, and you see the underside of a thatched roof, Tudor style, and adjacent, a mural of the sky. Half the room has a glass ceiling, and string lights create a European market feel.

The space has two floors, a bar and a large sign dubbing the atrium “The Oasis,” according to the listing.

“I love the Oasis. I love that there’s an indoor-outdoor spot — a little meditation space in the home,” said Malkova.

The kitchen overlooks the atrium and has an attached dining area with a small, hobbit-like door in the wall that leads to a crawlspace.

The two-floor library has a fireplace with crowned amethyst, and the ceiling has a clock face inside a compass, which is billed as the West Coast’s largest clock face. The house has a gym with a climbing wall, punching bag, ballet barre and other exercise equipment. And the decagonal master suite has a sauna and jetted tub, a fireplace and exposed wood-beam ceilings, according to listing photos.

“There are a few secretive architectural things about the castle, but I prefer to keep those a secret,” Tucker told The Post as he rifled through the castle blueprints in the library.

The castle also has a home cinema, where Tucker and Malkova have already enjoyed watching movies, including the filmed version of Lin-Manuel Miranda’s hit musical “Hamilton.” The theater has a red carpet, blue velvet couches, two chandeliers, theater-inspired curtain murals and a marquis that reads “Teatro: Welcome to Blackberry Castle” — not to mention the huge screen.

“I like the story aspect [of the castle] — no matter who walks in … from kids to elderly, they get a magical touch when they step inside,” said Lowe.

Sprawled across 6.4 acres hidden in northwest Portland’s Forest Park neighborhood, the estate grows its own pinot noir and chardonnay grapes, with a 400-bottle wine cellar concealed in the hillside (in addition to a wine cellar inside the house). Malkova prefers red wines, while Tucker prefers rum, so he enjoys the bar in the Oasis, he told The Post.

The gate has a metal banner that reads “Blackberry Castle,” and just inside, a brick-and-wood security office. The estate also has the original 1967 house on the property, near tennis courts and an in-ground trampoline, according to the Oregonian, which first reported the story.

Malkova and Tucker hope to make the castle even more eccentric. They plan to spend up to $1 million on a large pirate ship that will peek through the atrium into the backyard over a brand-new grotto pool.

“Something I’m really excited about — that was my idea, actually — is a grotto pool,” said Malkova. And “one of the first things we’re going to renovate is the master bedroom. It’s a very pretty, octagon-style room with a cobblestone fireplace, but it’s not very themed compared to the rest of the home.”

The castle was built by Andrei and Leslie Lupenko, who founded translation service Telelanguage. They first listed the estate in 2015, when they decided to move back to Portland proper, with an asking price of $7.175 million, according to the Oregonian.

The castle took seven years to construct and is famous for being on the market for so long — it was re-listed nine times and received eight price cuts before relisting at $3.9 million in July. In 2016, the late Swedish musician Avicii rented the castle while producing his final album, “Tim.”

Both Lowe and Davis said they did not know the buyers’ professions at the time of the sale.

“Adam is a Portland native specializing in high-end and luxury properties. While his clients come from all backgrounds and professions, he maintains strict confidentiality and respect for free speech. He provides the same high level of service to all people, and while he never needs to know what his clients do for a living or in their daily lives, he is firmly committed to helping them find a home and live their lifestyle by design, and to his mission to elevate and serve,” Davis’ office said in a statement to The Post.

Good news from Europe and Asia on the manufacturing PMI front
‘It’s instant, it’s ferocious’: A 40-year veteran on mining and finance
Gold and silver have slipped lower leading into the EU session
#SaveBritney: 4 Young Adult Books If You Stan Britney Spears
New Bone Cell Type Identified, Could Point to Drug Targets for Osteoporosis and Other Skeletal Diseases