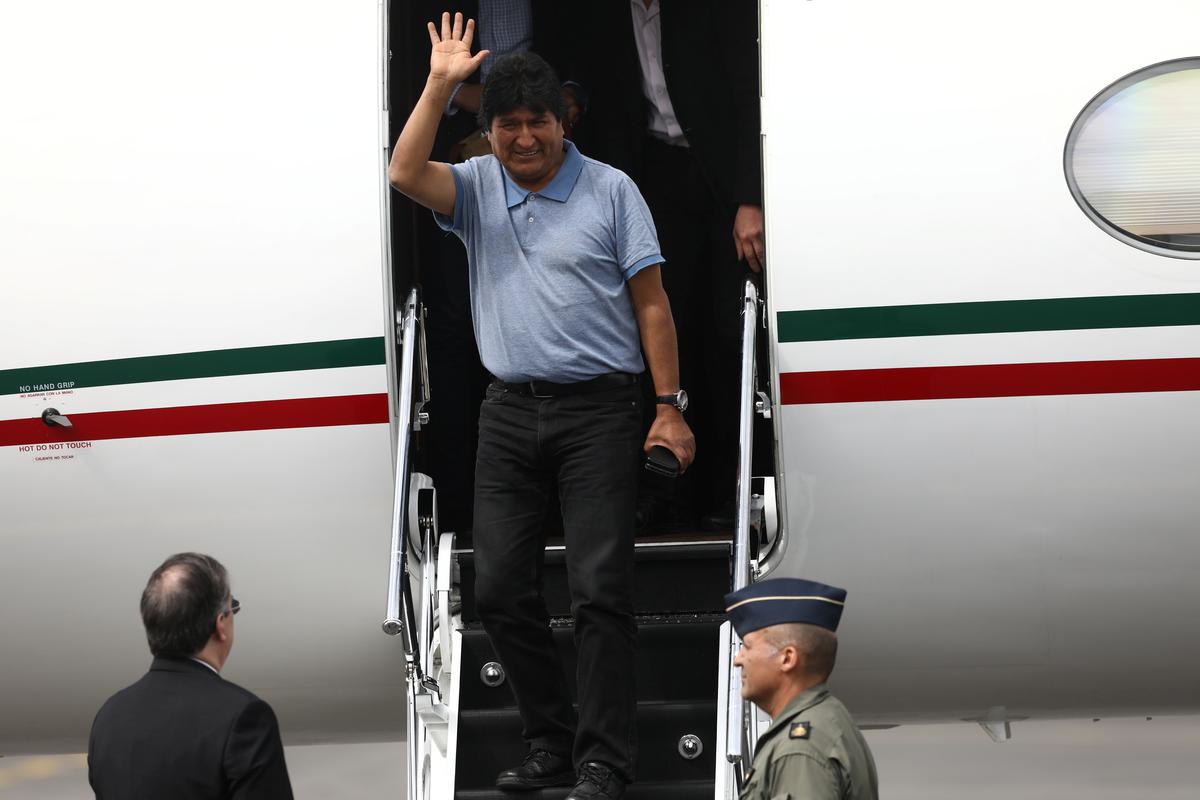 LA PAZ/MEXICO CITY (Reuters) – Bolivia’s former leader Evo Morales landed in Mexico on Tuesday pledging to keep up his political “fight”, as security forces back home quelled unrest over the leftist’s resignation and the country sought an interim replacement to fill a power vacuum.

Morales thanked Mexico for “saving his life” as he arrived to take up asylum in the country and repeated his accusation that his rivals had ousted him in a coup after violence broke out following a disputed election last month.

Morales was then whisked away in a military helicopter, television footage showed. Mexican officials have not said where he will stay, citing security concerns.

In Bolivia’s capital La Paz, meanwhile, politicians and civic leaders scrambled to restore order after weeks of protests that finally brought down Morales, the last of a wave of Latin American leftist leaders who dominated the region’s politics at the start of the century.

His resignation came after the Organization of American States (OAS) declared there were serious irregularities during the Oct. 20 vote, prompting political allies to quit and the army to urge him to step down.

Street clashes, looting and road blocks have roiled the poor South American nation since the election, and there have been more flare-ups since he resigned. Video footage on Tuesday showed police battling Morales supporters in the city of Cochabamba.

“We are emerging from one of the darkest episodes of our democratic history,” said Jeanine Anez, an opposition senator theoretically in line to take over as interim leader.

“I ask that from now on we join forces and our hands to help rebuild democracy and the rule of law.”

Lawmakers across the political divide were called to attend a meeting of Bolivia’s Legislative Assembly to formally accept Morales’ resignation and plan for next steps. Still, many with Morales’ Movement for Socialism (MAS) party stayed away.

Residents of La Paz said they hoped politicians would finally restore order to the highland capital, which has been rocked since the election by protests and looting. A union leader threatened a general strike if politicians fail to solve the impasse.

“Democracy has been at risk and hopefully it will be resolved today,” said resident Isabel Nadia.

Morales arrived in a Mexico after taking off from the central Bolivian town of Chimore, a stronghold of his supporters where the country’s first indigenous president retreated as his 14-year rule imploded. The journey was far from simple.

Takeoff was delayed, with supporters surrounding the airport. Then the plane was denied permission to fuel in Peru, Ebrard said, so it diverted to Paraguay, a stop which he said Argentine President-elect Alberto Fernandez helped arrange.

Ebrard had earlier tweeted a photo of Morales alone in the jet with a downcast expression, displaying Mexico’s red, white and green flag across his lap.

In a region divided along ideological lines over Morales’ fall, Mexico’s leftist government has supported his accusations of a coup. U.S. President Donald Trump meanwhile said the resignation was a boost for democracy.

In La Paz, roadblocks remained in place after soldiers and police patrolled into the night to stop fighting between rival political groups and looting that erupted after Morales’ resignation.

The charismatic 60-year-old former coca leaf farmer was beloved by the poor when he won power in 2006. He achieved steady economic growth in one of the region’s poorest nations and was for many years hugely popular.

But he alienated some by insisting on seeking a fourth term. He defied term limits and brought accusations of autocracy when he won a legal challenge to a 2016 referendum in which Bolivians voted against allowing him to run again.

His departure has added to a wave of unrest around Latin America, including in nearby Ecuador and Chile, where protesters have been berating leaders over social inequalities.

Paraguayan President Mario Abdo said on Tuesday his country had also been willing to grant political asylum to Morales, though he disagreed with accusations of a coup.

“If he resigned, it is not a coup. He resigned,” he said.

(For graphic on timeline, see tmsnrt.rs/2qLP4NK)