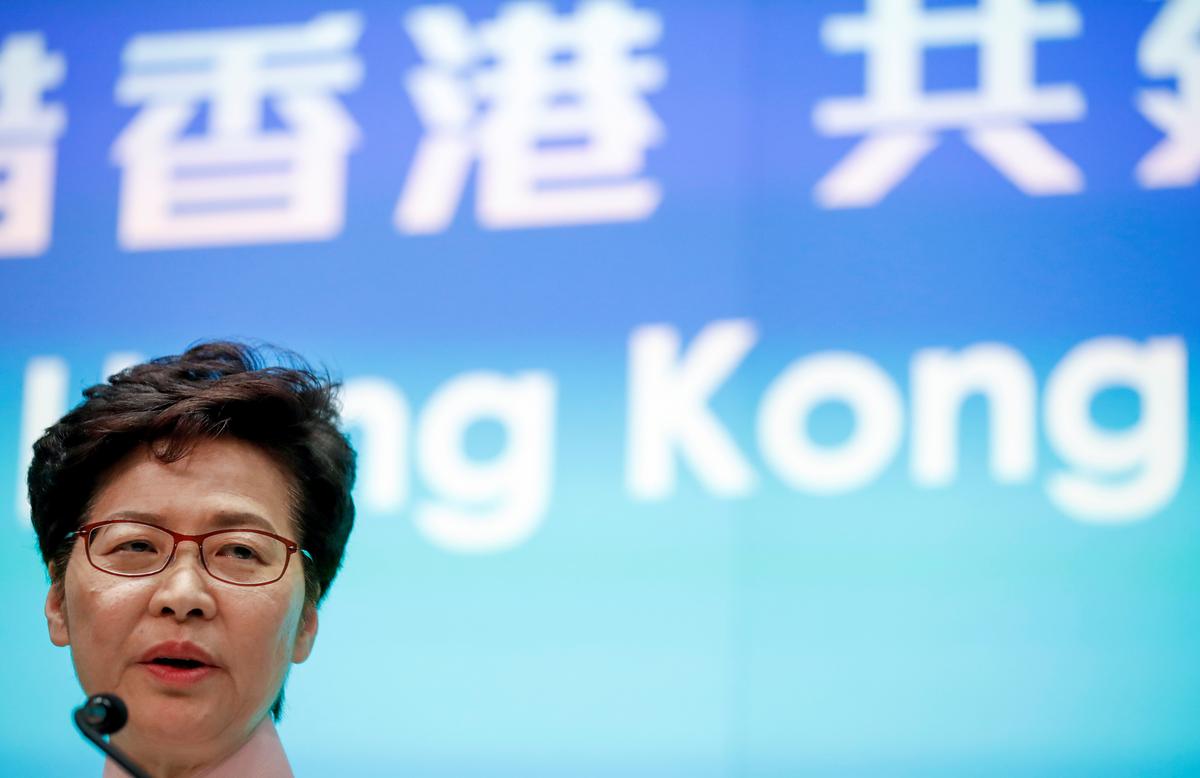 HONG KONG (Reuters) – Hong Kong leader Carrie Lam had to abandon her policy speech in the legislature on Wednesday because of jeering lawmakers but later offered no direct olive branch to protesters, hoping instead to ease resentment by building public housing.

Lam, who had to broadcast the annual address via a video link after the rowdy scenes in the city’s assembly, hoped to restore confidence in her administration and address discontent after four months of often violent anti-government protests.

She had to halt her initial attempts to deliver the address after pro-democracy lawmakers called out for “five demands, not one less” and projected the protest rallying cry onto a backdrop behind her.

The protesters’ demands include universal suffrage and an independent inquiry into what they say has been excessive force by police in dealing with demonstrations.

In her policy statement, Lam was unapologetic about her government’s response to the protests, which has seen her introduce colonial-era emergency laws and riot police fire thousands of rounds of tear gas and hundreds of rubber bullets at brick and petrol-bomb throwing activists.

“Any acts that advocate Hong Kong’s independence and threaten the country’s sovereignty, security and development interests will not be tolerated,” she said.

“Despite the stormy times and overwhelming difficulties Hong Kong is experiencing, I believe that so long as we accurately adhere to the principle of ‘one country, two systems’, we will be able to get out of the impasse.”

The protesters are angry at what they see as Beijing’s tightening grip on the city which was guaranteed 50 years of freedoms under the “one country, two systems” formula under which it returned to China in 1997.

Beijing rejects the charge and accuses Western countries, especially the United States and Britain, of stirring up trouble. The unrest poses the biggest popular challenge to Chinese President Xi Jinping since he came to power in 2012. He warned that any attempt to divide China would be crushed.

Lam later told a news conference that she had held “closed door” meetings with some members of the protest movement and when the unrest ended she would hold more to address the political situation.

“Both her hands are soaked with blood. We hope Carrie Lam withdraws and quits,” an emotional Chan said at a news conference.

Lam has rejected calls to step down.

In her news conference, the Beijing-backed Lam rejected two of the protesters’ five demands – amnesty for those charged and universal suffrage – saying the first was illegal and the second beyond the chief executive’s power.

Hong Kong’s boasts some of the world’s most expensive real estate and the inability of many young people to get a place of their own has fuelled the protests.

The measures Lam announced are among the boldest in recent years to take back large tracts of land held by a handful of powerful developers.

“We are determined to create home ownership opportunities for people of different income groups such that they will happily make Hong Kong their home,” Lam said.

“I hereby set a clear objective that every Hong Kong citizen and his family will no longer have to be troubled by or pre-occupied with the housing problem, and that they will be able to have their own home in Hong Kong.”

Lam said about 700 hectares of private land in the city’s New Territories would be brought back into public use under what is known as a land resumption ordinance.

More than half of the allocated land would be taken back in the next few years, she said, adding that a further 450 hectares had been earmarked for “resumption”.

Major developers, including Henderson Land (0012.HK), New World Development (0017.HK) and Sun Hung Kai Properties (0016.HK), are sitting on “no less than 1,000 hectares” of agricultural land, according to government estimates.

Lam urged all developers to support the land ordinance.

The Hong Kong stock exchange’s property sub-index rose more than 2% after the measures were announced.

Before Hong Kong returned from British to Chinese rule in 1997, the colonial administration often deployed the ordinance to take property for public use, offering compensation to landowners. But no leader has been able to successfully take back land from private developers since the handover.

The U.S. House of Representatives on Tuesday passed three pieces of legislation related to the Hong Kong protests, drawing a swift rebuke from Beijing, which accused the lawmakers of “sinister intentions” of undermining stability in Hong Kong.

One of the measures, the Hong Kong Human Rights and Democracy Act, would require the U.S. secretary of state to certify every year that Hong Kong retained its autonomy in order to keep receiving the special treatment that has allowed it to be a major financial centre.

A Norwegian lawmaker, Guri Melby, tweeted that she had nominated the Hong Kong people for the 2020 Nobel Peace Prize for their stand for freedom of speech and democracy.

Authorities have arrested more than 2,300 people since June when the unrest escalated, scores of them teenagers, some as young as 12 and the oldest 83. Two people have been shot and wounded and thousands injured.