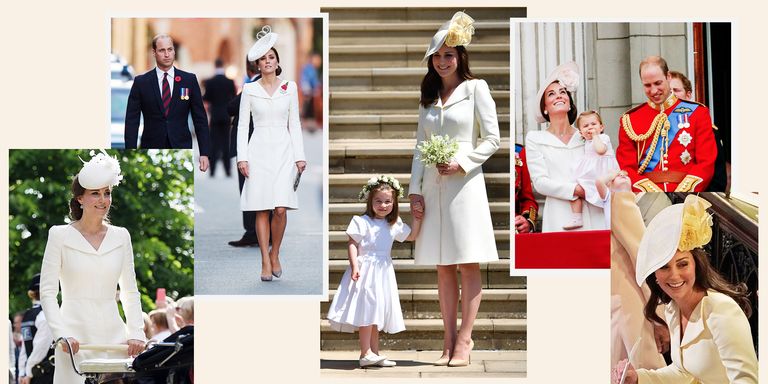 Meghan Markle was the unquestionable style star of the royal wedding, but fans of the Windsor family were also keeping a close eye on her new new sister-in-law, Catherine, duchess of Cambridge.

And plenty of people, from those fans to more casual followers, frowned when she appeared in a white-looking Alexander McQueen coat dress she had worn multiple times before. The hot takes were fast: “Kate shocks viewers with ‘cream’ coat,” screamed a headline in the British tabloid Daily Express. “Why Kate Middleton’s wedding outfit was a poor choice,” read the Sydney Morning Herald. E! News called her a “Repeat Offender” and Fox News said Kate got “slammed on Twitter.” My own Insta DMs were filled with dismayed Kate fans, lamenting her choice.

I am not here for any of it. Here’s why Kate’s dress was perfect. Don’t @ me.

The chief complaint was that her dress was white, which is largely considered a major wedding guest no-no. “Kate Middleton in white … she just can’t take that it’s someone else’s day,” tweeted one user.

The official description from the palace was “primrose yellow”—and I’ll be honest, that’s a bit of a stretch. Primrose yellow is a much deeper shade, almost a light marigold, than what Kate was wearing. On television and in photographs, her dress read more cream or off-white. It looked much yellower in the dim lighting of the church, and much whiter on the steps afterwards. (Her earrings were lemon yellow quartz, as if to will the dress into a different tone). Regardless, it was most definitely not bright, bridal white.

But even if it was, that’s OK! Remember Pippa Middleton stealing the show at Kate’s wedding in a white McQueen gown?

Having your bridal party wear white is becoming more commonplace (Kim Kardashian clothed her sisters in all white for both her second and third weddings) and is certainly seen more often in the U.K. It’s acceptable for guests, too, says Peggy Post, granddaughter-in-law of the famed etiquette expert Emily Post and author of more than a dozen books on etiquette. “Today, wedding guests can wear cream—or white for that matter—as long as the outfit doesn’t say ‘bride,’” Post wrote in a column the New York Times. If that Kate’s dress could talk, it would say “Wear me to a sensible service on Easter Sunday” not “Weee, I’m a wedding gown!”

Lastly, if you think that her ensemble wasn’t approved by both the Queen and Meghan, go home. Every damn second of the royal wedding was scripted, so you better believe Kate cleared her wardrobe choice ahead of time.

The repeat was a kind gesture

Kate is famous for recycling outfits—it’s part of what makes her such an adored style icon. Royals, they’re just like us! This particular coat dress has been in high rotation. We first saw it at Charlotte’s christening in 2015, again at the Queen’s birthday the following year and a third time in Belgium last year. It’s clearly a favorite of hers and—no surprise here—is exceedingly flattering, with an open neck revealing a hint of collarbone and a fitted waist.

But the fact that she was wearing it for the fourth time earned a side-eye from some on social media. “My interpretation is that Kate is saying, ‘I don’t care enough to even get a new dress.’ I think it is a diss,” wrote one person on Twitter.

Wrong again! Nobody can know what the Duchess was thinking (remember the palace motto is “Never complain, never explain”) but to me it read as the ultimate act of deference. Wearing something that has been widely photographed on three important occasions was Kate’s way of saying, “Nothing to see here! Focus on the bride!” She is exceedingly aware of her spotlight-stealing nature—remember, for Pippa’s wedding, Kate was not matron of honor, for that very reason—and is rumored to avoid other weddings so as not to cause a stir. The rest of her look was equally toned down. I’m sure she could have borrowed jewelry from the Queen’s collection; instead she wore a ring she was first seen sporting in 2008, three years before she married William.

What’s more, Kate made herself as scarce as she could throughout the whole ordeal. She showed up moments before the ceremony, as part of a whirlwind of children, and rushed into the church. She kept her head down for parts of the ceremony and stood just momentarily on the steps with the rest of the family. Most of the photographs of her are from the side, looking down at Charlotte or over at William. What Kate gave Meghan was the gift nobody else could give her: the world’s full attention. Would that we were all so gracious!

The woman just had a baby, leave her alone

Kate birthed her third child 26 days before the wedding. TWENTY SIX DAYS. That’s not even a full month. The duchess has more help than a regular person, but by all accounts she is an extremely hands-on mother. She is in the period of postpartum recovery when the torture of sleep deprivation takes hold and every article of clothing that fits (because most still don’t) is stained with spit-up. Also, Prince Louis is her third child, meaning her body is taking longer to recover and her older children are making it harder.

Again, we will never know the thought process behind the choice, but I’m guessing this particular McQueen is a forgiving, comfortable style. Not for nothing, it looks like the kind of garment that could easily come off or open up to nurse or pump throughout the day. Kate has close ties to the British fashion house—Creative Director Sarah Burton designed Kate’s wedding dress—and they undoubtedly would make any alterations or accomodations needed.

The fact that Kate attended at all was a total treat. The fact that she looked lovely in a recycled dress made it even sweeter.