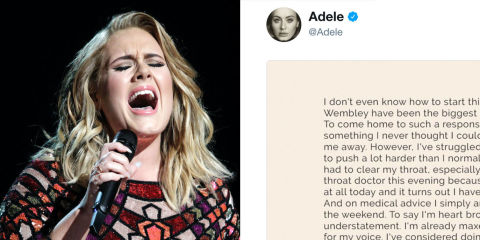 A “heartbroken” Adele has been forced to cancel her final two concerts at Wembley Stadium in England this weekend, after damaging her vocal cords. The singer had already performed two homecoming shows at the London venue this week, and was set to complete the four night run over the weekend.

In a heartfelt apology to fans, Adele made it clear that she didn’t want to cancel the final two gigs, but was advised to by her doctor.

“I don’t even know how to start this,” she said. “The last two nights at Wembley have been the biggest and best shows of my life.” She went on to admit that she “struggled vocally both nights” and “had to push a lot harder” than normal.

Adele explained, “I went to see my throat doctor this evening because my voice didn’t open up at all today and it turns out I have damaged my vocal cords… And on medical advice I am simply unable to perform over the weekend. To say I’m heartbroken is an understatement.” 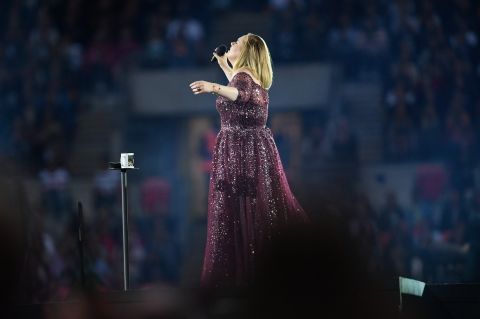 Adele also revealed that she’s taken steroids for her voice, and even though she considered performing the last two dates, she doesn’t feel as though she could make it through either set.

“I simply can’t crumble in front of you all and walk out on you in that way. I’ve even considered miming, just to be in front of you and be with you. But I’ve never done it and cannot in a million years do that to you.” 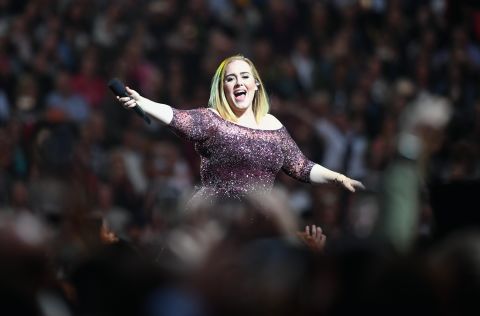 The singer also revealed that she changed her life “drastically” to make sure she could get through the tour and is “struggling” with not being able to finish it. “It’s as if my whole career has been building up to these four shows,” she said.

Adele added that refunds will be available if the shows can’t be rescheduled, and said, “There will be more information over the next few days. I’m sorry. I’m devastated. I’m sorry. I love you I’m so sorry, please forgive me x.” Obviously, Adele’s dedicated fanbase is wishing the signer a swift recovery.

However, if the shows can’t be rescheduled, Adele may have already performed her last ever concerts. Adele shared a letter to fans deep within the official Wembley programme, where she wrote, “I wanted my final shows to be in London because I don’t know if I’ll ever tour again and so I want my last time to be at home.”

Regardless, Adele wrote in the letter that she “will always write music and will always put it out,” so this is definitely not the end for the “Hello” singer.