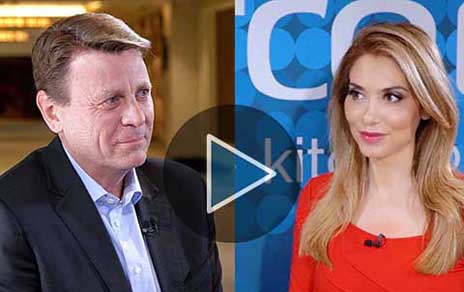 (Kitco News) – As the world transitions to renewable energy and electric vehicles, the demand for copper will significantly increase while supply is shrinking. “I am very excited that copper is going to have a very long, good run and we will have some organic exposure to it,” said Tom Palmer, CEO of Newmont. Newmont, which celebrated its 100th anniversary earlier this year, is the only gold mining company listed on the S&P 500.

Palmer discussed how Newmont is increasing its exposure to copper. “We have engineered a portfolio in our organic project pipeline which includes a number of copper projects,” he explained. “By doing nothing more than progressing our organic project pipeline through our investment system, and as we move into the latter part of this decade, into the 2030’s and the 2040’s, we will increase our exposure to copper because we have a number of gold/copper projects.”

Newmont also acquired GT Gold earlier this year, which includes the Tatogga project, a future copper/gold mine in British Columbia.

Copper was referred to as “the new oil” in a report released earlier this year by Goldman Sachs.

Last November, Newmont set ambitious targets to cut greenhouse gas emissions by 30 percent by 2030 and to be at net zero by 2050. “We are now actively working through identifying those projects where we can reduce the levels of greenhouse gas emissions used,” Palmer emphasized. “By 2030 we are going to be moving towards renewable energy, whether it’s hydro, wind, or solar. It’s going to require us to move to different forms of energy for driving our trucks like electric batteries or hydrogen.”

To help achieve its goal in reducing gas emissions, the company committed to spend $500 million over the next five years. “This is to support the investment in the things we need to do to hit those targets. We have led the trend in the industry in our goal to cut greenhouse gas emissions,” Palmer said. “After we made our announcement, a number of other miners lined up behind us and made the same commitment. As an industry we are moving in that direction.”

The price of gold is down about 7 percent year-to-date while Newmont’s stock price is down 9 percent year-to-date, and down 22 percent from its peak in May. “Gold prices have not moved much since May. We are a very good buy. I think gold equities are a good opportunity, if people are looking to move into a good long-term investment,” Palmer added. “What differentiates us from our competitors in the gold industry is our capital allocation policy. We have a very clear dividend framework. We pay a dividend of 55 cents per share each quarter. That represents, at our current share price, a yield of 4 percent.”

Newmont’s current projects in Tanami, Australia and the Ahafo North project in Ghana, are significant to its production, Palmer said. “Tanami is a world class asset where for the first time we are sinking a production shaft. It’s a cornerstone asset that really establishes our position there for many, many years to come.”

“Ahafo North is only 30 kilometers away from our Ahafo mine. Ahafo has got a really long life with multiple open pits and an underground mine,” Palmer said. “Ahafo North, as part of that complex, extends the life even further and lifts production of Ahafo.”

Palmer spoke about how difficult it has been for the gold industry to operate during the pandemic. “The virus continues, particularly through Latin America, to have a very significant impact on our workforce and communities,” Palmer emphasized. “We have benefitted from some pretty good gold prices, which helps to some degree, but it’s still been a tough period. It’s moved from our immediate response to the pandemic to something that is now a chronic issue that we have been managing for 18 months.”