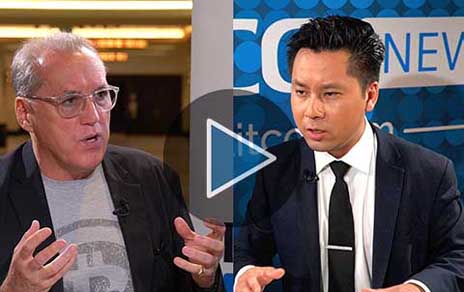 (Kitco News) – Investors, especially millennials have been more attracted to Bitcoin than gold recently because Bitcoin is capped at 21 million coins and gold investors are selling their gold assets. At the same time Bitcoin investors are holding onto them, said Frank Holmes, CEO, U.S. Global Investors. Earlier this year, Bitcoin crossed the $1 trillion market capitalization mark. Bitcoin is often referred to as ‘digital gold.’

Holmes, who is also the Chief Investment Officer at U.S. Global Investors, spoke to David Lin, anchor and producer of Kitco News at the Denver Gold Forum.

“Investors are buying Bitcoin because it’s decentralized. It’s also private property and portable. The same applies to gold. The question is where are they buying gold? Gold investors are not hodling their gold,” Holmes explained. “MicroStrategy comes along and quadruples the stock price by six-fold. Michael Saylor comes in and says he cannot grow this top line business faster than money supplies being printed. He’s going to turn around and use Bitcoin as a proxy.”

Gold investors need to reposition their story and stop selling their gold, if they have free cashflow, Holmes emphasized. “What’s happened in our world when it comes to gold, these stocks are much more quant driven in the analysis on doing comparative work, and it’s much more robust. We need to figure out a way to tell our story to a millennial that makes gold more broadly attractive.”

Both Bitcoin and gold have swung between gains and losses this year. “Millennials are buying into all this
money printing, but betting on Bitcoin. What’s going to resonate with the investor, is that the gold
producer believes with conviction that the money printing out there is going to get a bid,” Holmes said. “And that the price of gold and silver will actually take off because you are actually hodling it, but that is not what’s happening.”

Holmes advises investors to hold onto their gold investments and not sell them. “If you have big free cashflow, and you really believe in your product like gold or Bitcoin then you should be hodling it,” he added. “If I am hodling my gold, which we have done for high blockchain – we do hodl our coins. Not only does our revenue go up because Bitcoin Etherum rises, but our inventory goes from $5 million worth to $130 million. That’s a big balance sheet asset.”

Holmes also discussed the merger and acquisition activity in the gold industry. “There was major dilution in 2006-2007 among metal miners. Gold prices took off from that point. But those gold stocks didn’t. Then we had another rally in 2011,” he explained. “Once again, there were these crazy mergers that are non-accretive. I think today they are more accretive. There are much smarter mergers and acquisitions work done today. The main difference between today and 2007 is the dilution.”

U.S. Global Investors manages the Jets ETF, which is a basket of 52 stocks in the air travel industry. Jets has about $4 billion in assets under management which grew significantly during the pandemic. Holmes said he has a very positive outlook on the airline industry, and the lull we are seeing due to Covid is only temporary.”

“Our Jets ETF went from 40,000 shares a day last year to 8 million. It went from $40 million to $4 billion, triggered by the big institutional, and retail, on what they were seeing. Investors did their own research on the internet which is decentralized information,” Holmes emphasized. “Then as typical, after every crisis, the airlines fell 70 percent and then went up 120 percent. Investors did their own research and guess what? Warren Buffet was wrong, and they were right!”

For more on Holmes’ view on investing, watch the full video above. Follow David Lin on Twitter @davidlin_TV.