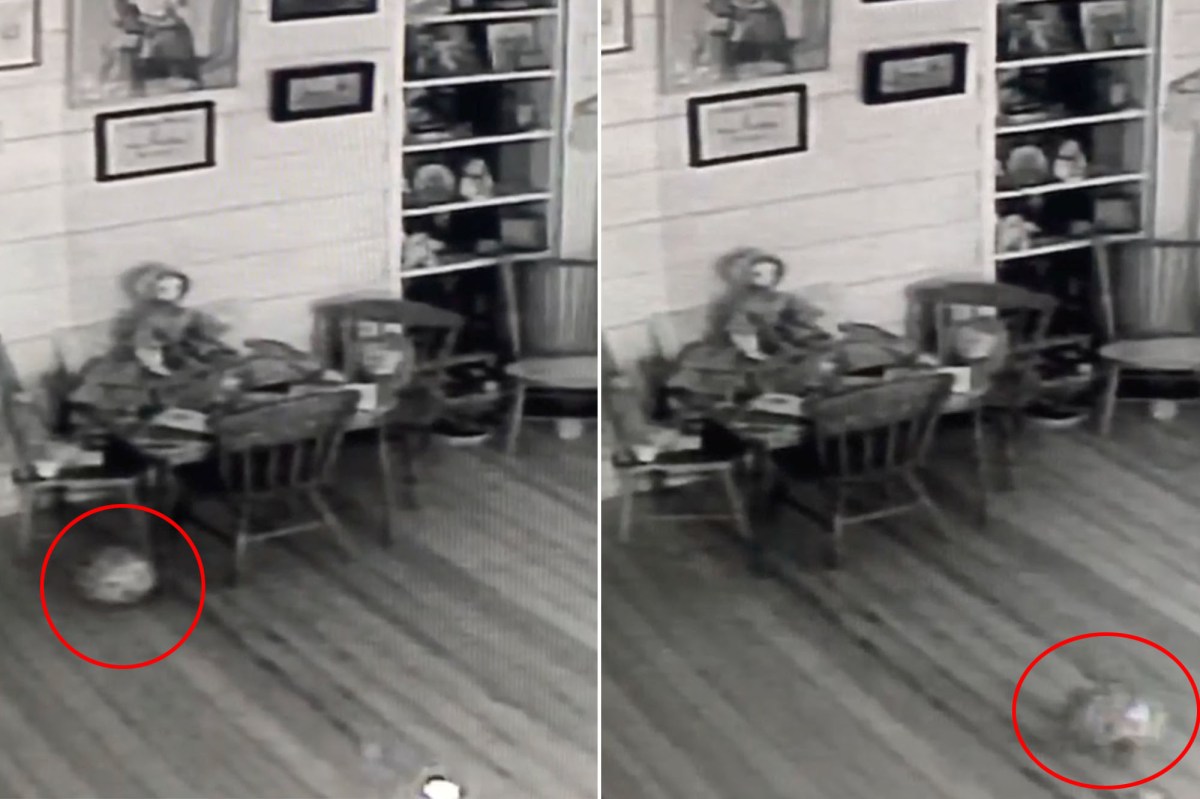 Zoinks! Is this historic hotel filled with ghosts, or is Scooby going to show up and pull off their masks?

A Texas hotel offers paranormal experiences, with guests reporting more than just bumps in the night. Some claimed their toes were pulled in bed, while others said they’ve smelled lemon pound cake or heard giggling, according to Airbnb reviews.

A new video from inside the hotel at 203 Crockett Street in Seguin, Texas shows a child’s ball rolling across the floor, seemingly by itself.

The blinking lights are tools called electricity magnetic pods, which some believe can “detect” ghosts, according to the South West News Wire, which supplied the video. The video was captured by hotel owner Erin Ghedi, who is a self-proclaimed medium and historian.

“Jim and I were in the other room and we could hear [their friends, who are paranormal investigators] Robbie and Wiley just yelling at us, “Come see! Come see! Jim! Jim!’ You know, and while he comes, and he pulls me, he goes ‘Watch the ball,’ and I’m like ‘Whoa, okay, what ball? Okay,’ and so he goes ‘Watch.’ And Robbie said ‘Can you move the ball?’ And it rolls right to him,” she told PBS in a 2014 “Strange Town” docuseries.

Ghedi and her husband attribute the activity to a ghost they call Emma — one of 20 so-called spirits they say visit the house — including seven people who died there, a fortune teller, a slave, a neglected child and a love-scorned woman who disappeared there, Ghedi told PBS in 2014.

“Emma enjoys rolling a ball and we can hear her laugh and sing and hear her footsteps,” Ghedi recently told South West News Service. “We hear her quite often.”

The “Emma” to whom they refer was a 12-year-old girl named Emma Voelcker who was murdered with an axe in 1874, as recorded in newspapers at the time and recently reprinted.

Two suspects in the murder were both staying at the Magnolia Hotel that night — convicted murderer William Faust, or Ghedi’s suspect M.P. Deavers, who she says planned to rob Emma’s family, as she claims in her book “Mysteries of the Magnolia Hotel.” The Post could not independently confirm information about the murder suspects.

Emma isn’t the only so-called spirit known to roll a ball in the house, according to three recent Airbnb reviews, which attribute moving toys to a child named Itzy, who was allegedly locked in the room each day while her mother went to work, according to Ghedi.

“Under a full moon and with a roaring thunderstorm we had a lot of… interactions. With Itsy [sic] especially! Oh boy, she rolled a ball from her room to Rosebud’s… I saw the top of a head run by followed by some light humming which we believed to be from her too,” said a guest named Brooke in her April 2021 Airbnb review.

Over the years, the structure served as a frontier hotel, a stagecoach stop, a jail where “many prisoners” were believed to have died, a shelter when violence broke out between Rangers and Native Americans, a brothel and even a speakeasy, according to the hotel’s website.

The Magnolia hotel was originally a two-room 1840’s log cabin with a raid shelter and a jail, owned by Texas Ranger James Campbell. He died several years later near the house in a Rangers conflict with Native Americans, according to the hotel’s website.

The home received a three-room limecrete (local gravel) addition under the ownership of a wealthy settler named Joseph F. Johnson, who founded the hotel in 1847 and died there in 1890, according to the National Registry of Historic Places.

The hotel passed through several owners in the 1840’s and 50’s, when the two-story Greek Revival frame structure — the oldest frame of its kind in the city — was added. Original historical features include its large sash windows, plain end pilasters and cornice board, according to the National Registry of Historic Places.

The 10,000-square-foot building was converted into apartments for oil field workers in the 1930’s and was vacant for over a decade before Ghedi began the restoration in 2013, according to Preservation Texas.

“The spirits started to show up on day one,” she said. “Now that Jim and I have restored it, they’re all very happy there… It was a little overwhelming at first, but we’ve grown used to them, we know who they all are and we’re quite comfortable with them.”

A night with the axe-murderer

For guests who stay at the hotel, expect to pass a crepe myrtle tree marking the place where frontiersmen hung men they determined to be outlaws, and go up the home’s original 1850’s wood staircase.

The guest suite has five rooms that were part of the original hotel, including the living room where legend has it that a traveling salesman slit his throat, a queen-sized bedroom where an elderly woman named Amalia allegedly died in her sleep, a king-sized bedroom where a John Doe is said to have been smothered in the night, a kitchen with a rocking chair that supposedly rocks itself and a pink bathroom where a woman is said to have died in childbirth, according to the San Antonio Express-News.

The Post was unable to independently confirm these incidents.

Guests can also explore the second floor, which has not been restored and offers the ultimate “creepy” vibes.

There, guests will find Madame Rosebud’s room, where the town’s most famous madame allegedly killed a man who wouldn’t pay, a room that is said to have belonged to a slave named Sam Woods, and “the murderer’s room” — it’s not clear if that refers to serial killer William Faust, or Ghedi’s suspect, M.P. Deavers.

Ghedi offers two-hour ghost tours on the hotel’s website and overnight stays starting at $232 a night on Airbnb.