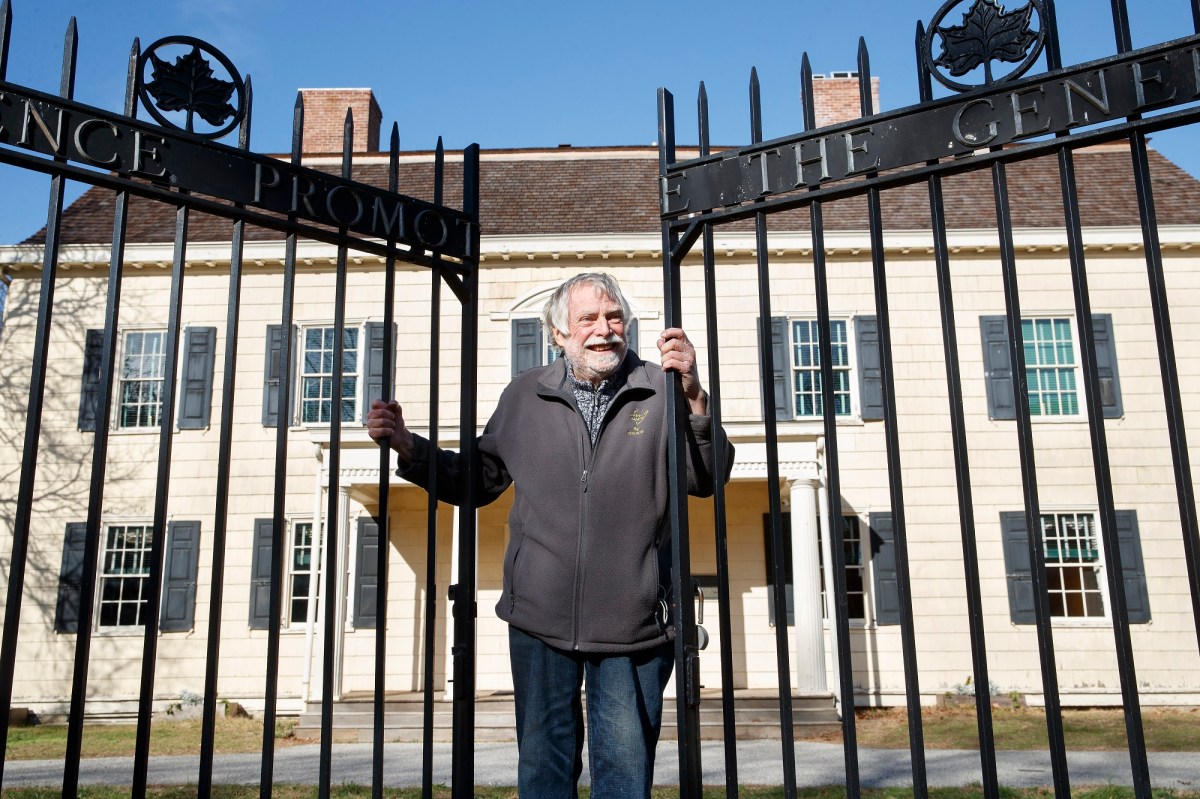 Roy Fox hasn’t paid rent for his New York City apartment in more than 30 years. But he’s not sweating an eviction.

In a city of 8.4 million people, Fox, 81, is one of just 23 lucky New Yorkers who reside in one of the city’s publicly owned historic sites spread across the five boroughs.

After working as a radio host in cities from his native Chicago to Detroit and Pittsburgh, Fox, a gregarious rascal brimming with well-worn one-liners happened upon an offer he couldn’t refuse: a chance to live rent-free in the King Manor House, an 11-acre historic landmark in Jamaica, Queens.

The only catch? Serving as its caretaker.

He never signed a contract or agreed to any concrete terms but that was more than 30 years ago. Who’s counting?

While he doesn’t earn a salary, Fox also doesn’t have to pay a dime to live in one of the biggest houses in one of the most expensive cities in the world.

“It’s payment for all the years I’ve done, doing nothing,” Fox joked of his role in the 29-room, 22,000-square-foot historic mansion.

In the late 1980s, Fox’s then-wife had a job restoring the carousel at Brooklyn Bridge Park. Her boss tipped her off that the Park’s Commissioner was looking for someone to live in the King Manor and the rest is history.

“It was such a New York story,” said Fox of the serendipity of finding his beloved home.

Fox was lucky enough to arrive in 1989 just as the centuries-old manor once owned by Rufus King — one of the five framers of the US Constitution and a vocal abolitionist, whose sons Charles King and John Alsop King became president of Columbia College and governor of New York, respectively — was undergoing renovations.

“The beginnings of anti-racism were here at King Manor with this family and others like them,” Fox said. “I’m housebound, but what a house to be bound in.”

His timing gave him the opportunity to advocate for how the old servant’s quarters — soon to be his own apartment — were to be redesigned. His two-bedroom home on the third and top floor of the estate is oddly shaped, thanks to a 19th-century renovation that clumsily combined three original buildings on the farm.

Fox’s apartment includes a combined kitchen and dining room, an office, which sits four steps below the rest of his apartment, one bathroom and two bedrooms. But he frequently abandons his king-sized bedroom in favor of a snooze on his spare bedroom pullout.

Connected to his office, and separated from the rest of the mansion, is a tiny pink room. It is presumed to have originally acted as a child’s room for warmer seasons, as it doesn’t have a fireplace.

Fox stopped the crew from closing off the kitchen, as was in the blueprint, to maintain more open space for dining, though he admittedly doesn’t cook. A sign hangs in his kitchen that reads, “This kitchen is here because it came with the place.”

He does, however, make snacks. A popcorn machine stands at the ready, eager to be fed the special yellow kernels Fox picks up at the Union Square Farmers Market.

Before COVID, he accepted guests — old friends, King scholars and manor staff — for popcorn, beer and an animated history lesson.

But today, he lives almost alone — his first and then second marriages didn’t stick and he never had children — save for his beloved feline roommate Super Cat, a stray that adopted him a year and a half ago.

However, over the years in his role as caretaker, Fox has accumulated a large ersatz family of museum staff, researchers, community members and friends.

“Fox is the heart of King Manor,” said King Manor executive director Kelsey Brow. “Years pass, and the Fox is still in the house. He always says ‘King Manor, like no other museum.’ Well, there’s no other caretaker like our Fox!”

The center of Fox’s unique home is his office where he spends the day at a simple wooden desk angled next to the best window, which provides a magnificent view of the green grounds that surround the estate. Turn 180 degrees and another window offers a peek at bustling Jamaica Avenue.

His space is simply outfitted with the exception of a festive 4-foot-tall spruce tree a friend gifted him. Fox decorated it with white Christmas lights.

“It’s like me, it’s hysterical, not historical,” Fox said of his décor. “I’m not big on furniture.”

There are no antiques or other historic artifacts in his living quarters. He said that he likes to keep all the history downstairs in the more public-facing manor. Down there, he loves to admire the oversize US Constitution that rests on a table in the living room below, and the life-sized statue of King — Fox makes a game of sneaking objects like books and a paper copy of the US Constitution into the statue’s hands to amuse visitors.

You won’t find a TV in Fox’s den. He hasn’t owned one since 1982 when he gave his away to a homeless guy. But what he doesn’t have in 21st-century entertainment or fancy knickknacks, he makes up for in books.

Fox owns more than 4,000 pieces of literature, from the historic and significant, to today’s best sellers (Mary Trump’s “Too Much and Never Enough” is his most poignant read of 2020, he relayed).

The apartment has so many books that it beats out King’s own collection of 3,200 books, many of which now reside in the Library of Congress.

“I feel like I’m surrounded by my friends,” Fox said of his massive book collection.

Fox reads and writes voraciously, always carrying a pen and piece of paper with him around his apartment and the house, taking notes, capturing quotes and circling passages in his books.

Fox said that he is unbothered by the solitude of shuffling around a giant manor and months of no visitors (the museum just reopened in September with three tours a day and advance registration required). He is content with his books, his cat and the history in the floorboards.

He’s also unperturbed at the thought that the spirits of historic figures may be rattling around in the night when he is on the property alone.

“Haunted? The only scary thing in this building is me,” Fox laughed, noting the exception of Super Cat. “From the moment I come into the apartment, she’s by my side.”