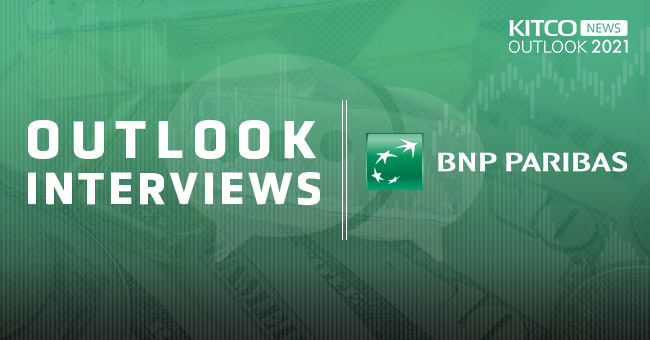 Kitco News has launched its 2021 Outlook, which offers the most comprehensive coverage of precious metals markets in the new year. Trillions of dollars were pumped into financial markets in 2020 and that won’t come without consequences. Economists expect that investors will be Bracing For Inflation in 2021.

(Kitco News) – Gold prices are struggling to push back above $1,900 an ounce ahead of the new year. According to one bank, the precious metal can generate enough momentum for one more push above $2,000 an ounce before the market runs out of gas by the second half of the year.

In his year-end forecast, Harry Tchilinguirian, head of commodity research at BNP Paribas, said that he sees gold prices peaking in the second quarter next year, averaging $2,010 an ounce. The analyst is relatively neutral on gold for the year, forecasting an average price of around $1,945.

In a telephone interview with Kitco News, Tchilinguirian said that he is optimistic about gold in the short-term as global monetary policies and fiscal stimulus measures will keep the pressure on bond yields and even push yields further into negative territory.

“Negative real yields will be very important for at least in the next two quarters. But after that, the situation changes a bit because people’s view on the economy changes,” he said.

Tchilinguirian said that gold’s safe-haven allure in the first half of the year will start to fade in the third quarter due to rising investor optimism as expectations pick up that the global economy will be able to recover from the devastation wrought in 2020 from the COVID-19 pandemic. Ahead of the new year, countries around the world have started rolling out vaccines for the deadline virus.

Tchilinguirian said that BNP economists expect to see wide-spread vaccination by the second half of the year.

“We’re likely to see the nominal yield, especially on ten-years, go up. And of course, that brings a real yield backup, which is bad for gold,” he said. “By the time we get to 2022, the macro risks associated with the COVID outbreak begin to receive considerably. And as a result, safe-haven demand for gold should also recede. All those investors who had their funds tucked into gold; they’re going to start reconsidering their allocation and start moving back into risky assets.”

As for inflation pressures, Tchilinguirian said that the pandemic has created so much slack in the global economy that it will take a while for consumer prices to pick up. He noted that unprecedented monetary policy will continue to inflate asset prices; however, that won’t trickle down to the general economy.

“In our forecast horizon, if we see the subdued inflationary pressures and nominal yields, rising with the economic growth recovery, you get real rates that go back up,” he said.

With inflation expected to remain subdued through 2021, Tchilinguirian said that the most significant risk for gold in 2021 is the unprecedented investment demand that drove prices to record highs in August. The amount of gold held in gold-backed exchange-traded products is at record levels. It could have a significant impact on the market in 2021 if investors start to liquidate their positions.

A mass exodus from ETFs in 2013 created the biggest drop in the gold market in three decades. While Tchilinguirian said that he is watching this sector of the market closely, he added he thinks the scenario for a repeat of 2013 remains low.

He noted that the gold market has one saving grace: a weaker U.S. dollar. He added that the same factors that will drive gold prices lower –improving economic growth and rising investor sentiment — will also weigh on the U.S. dollar.

He said that the U.S. dollar will act as a parachute for gold, creating a more orderly decline in prices instead of a precipice decline.