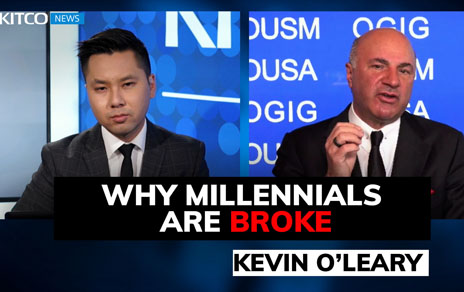 America is facing a generational crisis where younger people have no wealth built up and lack the financial literacy to do so, said Kevin O’Leary, star of Shark Tank and chairman of O’Shares ETFs.

“In America today, there’s 100 million people that have nothing set aside for retirement,” O’Leary said. “That is a failure of financial literacy that started as far back as the 1970s.”

Reform needs to happen at the educational level, O’Leary said.

“We really need to change the curriculum in high school, at the ages of 13 and 14, to start to explain how a credit card works, how the market works, that needs to be mandatory, not supplemental,” he said. “The state of Florida has brought it into their curriculum, it’s mandatory. We need to see that in New York, Texas, and California, they’re the majority of where the schools are and then the rest of the states will follow.”

On some of his best holdings, this year, O’Leary initially refused to invest in MindMed (MMED.NE) when CEO JR Rahn approached him. Eventually, O’Leary changed his mind.