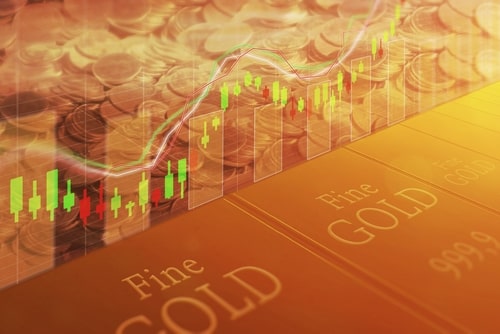 (Kitco News) Recent gold price action has been highly dependent on the stock market and analysts are carefully watching another potential move into cash if there is a major market selloff.

“One of the primary catalysts of the metals market until we get a little closer to the election is going to be the equity market,” said Kitco Metals global trading director Peter Hug.

The valuation in the equity space is concerning considering the economy is still in the beginning stages of its recovery, Hug pointed out.

“FANG stocks took equity market up. But that bubble has certainty been pricked and rotation has to go into normal economy stocks. When only 30%-40% of the economy is open of pre-COVID levels, the valuation is as if the economy is at full guns. Something is not balanced here and if the market takes a big hit, people might be moving into cash ahead of the election,” he said.

Hug is bullish on gold next week with one caveat — that the equity market at least holds or rises. “If the equity market takes a hit and sells off, that is going to be negative for the industrial complex — palladium, platinum, silver, and will drag gold down with it,” he explained.

Another fiscal package from the U.S. administration will also be critical before the election, Hug added.

“People will get nervous with this valuation of equity markets without a fiscal stimulus … Powell was a bit weak in his urging of the US government to add more stimulus to the economy. It appears that it may not happen before the election”, he said. “If there is a package that gets out, then both the equity markets and the metals will go higher.”

“If they come off, they can push the metal higher,” he told Kitco News, Friday. “Equities are in a risk-off environment and could weigh on the metals.”

“As long as gold can hold $1,925, I am constructive the metals going up into the election with the caveat that equity markets don’t take more than a 5% hit,” he said.

It has been very healthy two weeks for the gold market due to the consolidation phase, noted Hug. “That generally indicates to me that the market is setting up for a move higher when it consolidates in these levels because, given the global stimulus from central banks, it is hard to be bearish gold,” he said.

TD Securities head of global strategy Bart Melek is expecting gold to head higher next week as he watches $1,960 an ounce on the upside and $1,933-35 on the downside.

LaSalle Futures Group senior market strategist Charlie Nedoss is also expecting higher prices next week, highlighting the $1,952.70 level as the one to watch.

A more neutral perspective sees the possibility of gold dropping to $1,904-$1,910 next week before moving higher again, according to Pavilonis. “Ultimately, we are consolidating. Next week, we might see the downside and find support and move higher,” he said.

As markets start to approach the U.S. November elections, volatility in both the stock market as well as the precious metals space will rise.

Traders might fear the uncertainty and take money off the table to wait until the election results are clear, said Hug. “They’ve got a large profits in their hands,” he noted.

Aggressive comments from both presidential candidates will add to the volatility as the election season heats up, Melek told Kitco News on Friday.

“We are getting neck-dip into the political season in the U.S. getting quite pronounced. We are getting very aggressive comments from the President, Democrats, we are seeing aggressive rhetoric about China and tax policy. That will create some sort of significant amount of volatility. Markets may worry about certain statements,” Melek said.

Also, the possibility that the November election of being contested is adding another layer of complexity, said Melek. “This is potentially very problematic,” he said.

“Political uncertainty tends to benefit gold. But if we have a full rout liquidity crisis, it is not going to be good for anything. People will go back into cash,” warned Melek.

In the meantime, markets are eyeing the U.S. President Donald Trump’s decision on whether or not to approve Oracle’s proposed purchase of the U.S. operations of the popular video-sharing app TikTok.

On Friday, the Commerce Department announced that it will ban U.S. business transactions with China-owned WeChat and TikTok starting on Sunday.

“The move is another ratcheting up of U.S.-China trade and political tensions … The U.S. move could inject more uncertainty into the market place and that would be bullish for the safe-haven metals,” said Kitco’s senior analyst Jim Wyckoff.

Analysts in the gold space are also watching an alarming rise of coronavirus cases in Europe, which could have a significant impact on the economic recovery and the stock market.

However, most are not yet convinced that the rise in cases will lead to any significant shutdowns like back in March.

“We suspect that the pull-back in global equities over the past couple of days will be short-lived unless the rise in new cases starts to weigh more heavily on the economy again,” wrote Capital Economics economist Jessica Hinds. “National lockdowns still appear to be off the table, but things can change quickly and the risk of one is higher than it was only a week or two ago.”

Strategists at BBH Global Currency Strategy also said they don’t expect major lockdowns just yet. “There will likely be more chatter about restrictive measures out of the UK and Europe. However, we very much doubt any larger scale lockdowns will be implemented at this juncture,” they wrote on Friday.

The most important data point to watch next week will likely be the U.S. durable goods orders, scheduled for Friday.

“Durable goods orders will be preliminary and anything modestly below expectations will likely mean the market will believe that the Fed will do more,” Melek said.”