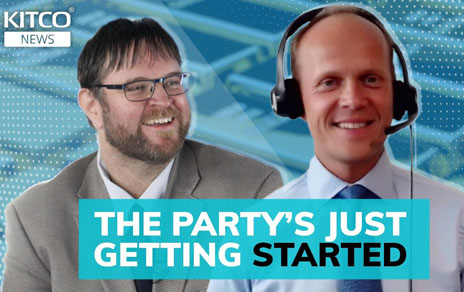 (Kitco News) – Gold‘s current consolidation period is helping to remove some froth from the market, letting sentiment catch from the strong momentum seen this past summer that push prices to $2,000 an ounce, according to one fund manager.

Although gold is caught in a trading range between $1,900 and $2,000, Ronald-Peter Stoeferle, managing partner of Incrementum and an author of the annual In Gold We Trust report, said that it is only a matter of time before prices push higher.

In an interview with Kitco News, on the sidelines of the virtual Beaver Creek Precious Metals Summit, Stoeferle said that all signs indicate that gold is current in a “stealth bull market.”

“We saw that when gold went over $2,000, everybody was, was writing about gold and sentiment felt a bit too positive,” he said. “And then we came down, but it seems that there’s so much capital waiting on the sidelines at the moment that we just don’t see any deeper correction. I think that the important message is, we are in a stealth bull market. I think this party has only just begun.”

Stoeferle added that it is difficult to be bearish on gold as the Federal Reserve is expected to keep rates at the current zero-bound range for the foreseeable future. Wednesday, the U.S. central bank indicated in its forward guidance that it is not expecting interest rates to rise for the next two years.

With interest rates expected to remain low through 2023, Stoeferle said that investors now need to pay close attention to inflation. He noted that rising inflation will keep real interest rates down, creating the perfect environment for gold.

“Gold, silver, the entire the commodity space, they’ve all been rising pretty strongly in the last couple of months. So I think the market is already telling us: careful inflation is on the horizon and that’s actually, you know, what the Federal Reserve and politicians wants,” he said.

The precious metals market has seen a flood of investment interest so far this year and Stoeferle said that he doesn’t expect this trend to end anytime soon. He noted that on average fund hold a 0.5% allocation to gold.

“Basically there is no allocation at the moment and this will change. This marked the beginning of the so called public participation phase,” he said.

Looking at the mining sector, Stoeferle said that he still sees plenty of value for investors. He noted that the NYSE Arca Gold BUGS Index ($HUI) is trading at half the level it was at in the last bull market in 2011. He added that mining companies are also in better fiscal positions than they were nearly 10 years ago.

“Companies, they really did their homework over the last couple of years,” he said. And now they’re harvesting now as shareholders, we’re getting dividend growth. We’re seeing the margins are extremely high.”

Kevin O’Leary says give stimulus to the people who need it, not ‘zombie companies’
U.S. reports more than 71,600 new Covid cases as new infections near record highs and hospitalizations rise
Pelosi says Dems and White House are moving closer to a stimulus deal, downplays Tuesday deadline
Jim Cramer says these 7 ‘thesis’ stocks, including Peloton and Netflix, will go higher until coronavirus is controlled
Netflix misses on subscriber additions and EPS