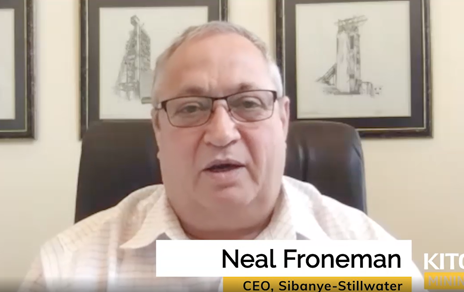 (Kitco News) – Despite the rise of electric vehicles, platinum group metals still have a good 10 years in front of them, and an entry by the world’s largest primary producer of platinum, Sibanye-Stillwater, into the battery space is planned in “due course,” said CEO Neal Froneman.

Sibanye-Stillwater (NYSE:SBSW) timed its entry into the platinum group metals space perfectly by picking up discounted platinum assets in the mid-2010s. Sibanye-Stillwater, which was spun out of South Africa’s Gold Fields in 2013, picked up Anglo American’s Rustenburg for $95 million in 2015. It also purchased South African platinum miner Aquarius for $294 million 2016.

Palladium and rhodium were some of the top-performing metals of the past decade due to tighter automotive emission standards.

Froneman said Sibanye-Stillwater will record a production hit in Q2 due to South Africa’s COVID-19 restrictions. Froneman said mining activity was reduced from the beginning of the second quarter and into the month of May.

“Fortunately, Stillwater operations in Montana in the U.S. were declared a strategic and an essential service, because the platinum they produce is for medical purposes,” said Froneman.

Froneman is proud of Sibanye-Stillwater’s bets by entering areas of the market that are “counter-cyclical.”

“We’ve done a lot of work in terms of supply and demand fundamentals. We made sure before we made any moves that we understood the market and where the medium to long-term demand was going to be. Of course, we have to do very good due diligence on just about every company in the space.”

Palladium and rhodium have been in greater demand due to their superior role in emission reductions. Thus the leap in prices for both metals.

“We’ve felt it necessary to get the PGM sector back into balance, so we have sponsored research with BASF into what we call Tri-Metal Catalysts. There’s potentially a real shortage of palladium. Rhodium is in an even worse position.”

Froneman said he expects substitution to happen “sooner rather than later.”

Regarding the threat posed by electric vehicles, which don’t needed PGM metals for catalysts, Froneman said internal combustion engines will still be around for a while.

“Part of our strategy is to enter the battery electric metals space in due course, but from a PGM perspective, the gasoline internal combustion engine has a good 10 years in front of it.”