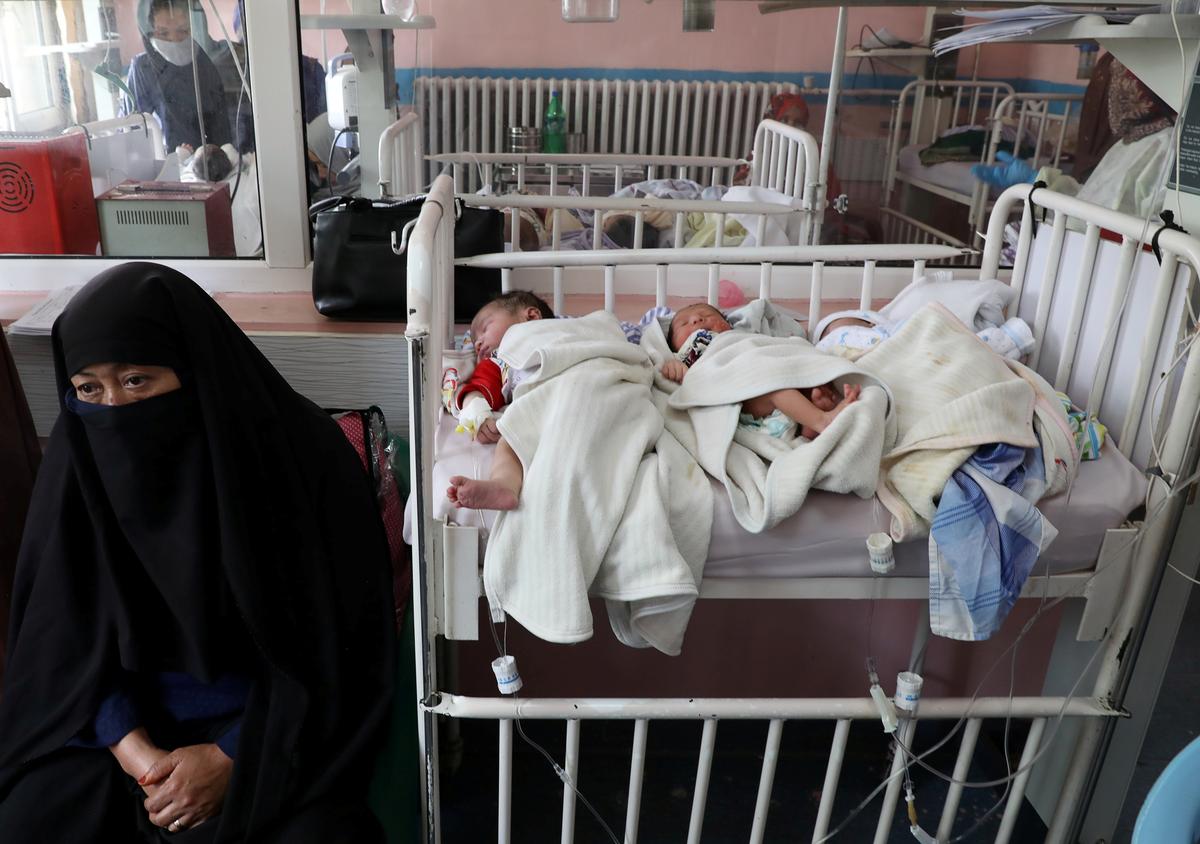 KABUL (Reuters) – After struggling to get pregnant for years, Zainab, 27, gave birth to a baby boy on Tuesday morning at a small hospital in the southwestern corner of Kabul. She was overjoyed and named the boy Omid, meaning ‘hope’ in Dari.

FILE PHOTO: Newborn children who lost their mothers during the yesterday’s attack lie on a bed at a hospital, in Kabul, Afghanistan May 13, 2020. REUTERS/Omar Sobhani/File Photo

At around 10 a.m. (0530 GMT), an hour before she and her family were set to return home to neighbouring Bamiyan province a three-hour drive away, three gunmen disguised as police burst into the hospital’s maternity ward and started shooting.

Zainab, who rushed back from the washroom after hearing the commotion, collapsed as she took in the scene. She spent seven years trying to have a child, waited nine months to meet her son and had just four hours with him before he was killed.

“I brought my daughter-in-law to Kabul so that she would not lose her baby,” said Zahra Muhammadi, Zainab’s mother-in-law, unable to contain her grief. “Today we’ll take his dead body to Bamiyan.”

No group has claimed responsibility for the massacre of 24 people, including 16 women and two newborns. At least six babies lost their mothers in an attack that has shaken even the war-torn nation numbed by years of militant violence.

“In my more than 20-year career I have not witnessed such a horrific, brutal act,” said Dr. Hassan Kamel, director of Ataturk Children’s Hospital in Kabul.

The raid, on the same day that at least 32 people died in a suicide bomb attack on a funeral in the eastern province of Nangarhar, threatens to derail progress towards U.S.-brokered peace talks between the Taliban and the Afghan government.

President Ashraf Ghani condemned the attacks and ordered the military to switch to offensive mode rather than the defensive tactics it adopted while U.S. troops withdraw from the country after a long, inconclusive war.

The Taliban, the main militant group, has denied involvement in both attacks, although trust among officials and the broader public has worn thin. An offshoot of Islamic State is also among the suspects: it admitted it was behind the Nangarhar bloodshed.

WE NAMED HIM ‘HOPE’

Muhammadi, the mother-in-law, said she saw one of the attackers firing at pregnant women and new mothers, even as they cowered under hospital beds.

The gunmen then turned to target the cradle where Omid had been asleep. As the sound of bullets reverberated through the ward, Muhammadi said she fainted in fear.

“When I opened my eyes, I saw that my grandson’s body had fallen to the ground, covered in blood,” she recalled, as she wailed with grief.

The Kabul attack began in the morning when gunmen entered the Dasht-e-Barchi hospital, throwing grenades and shooting, government officials said. Security forces had killed the attackers by the afternoon.

Just hours before the attack, MSF had tweeted a photo of a newborn in his mother’s arms at the clinic after being delivered safely by emergency caesarean section.

On Wednesday, the group condemned the attack, calling it “sickening” and “cowardly”.

“Whilst fighting was ongoing, one woman gave birth to her baby and both are doing well,” MSF said in a statement. “More than ever, MSF stands in solidarity with the Afghan people.”

Deborah Lyons, head of the U.N. mission in Afghanistan, condemned the hospital assault in a tweet. “Who attacks newborn babies and new mothers? Who does this? The most innocent of innocents, a baby! Why?”

In a statement, U.S. Secretary of State Mike Pompeo on Tuesday condemned the two attacks, noted the Taliban had denied responsibility and said the lack of a peace deal left the country vulnerable to such violence.

Pompeo also described the stalled peace effort, which planned for intra-Afghan peace talks to begin on March 10, as “a critical opportunity for Afghans to … build a united front against the menace of terrorism.” Talks have yet to start.

The Pentagon declined to comment on Ghani’s stated intent to restart offensive operations, saying only that the U.S. military continued to reserve the right to defend Afghan security forces if they are attacked by the Taliban.

Relations between the government in Kabul and the Taliban movement, which was ousted from power in 2001 by a U.S.-backed assault in response to the Sept. 11 attacks, are already frayed, and Tuesday’s events will make any rapprochement harder.

For Afghanistan, the hospital attack also risks further disrupting a healthcare network that is creaking amid the challenges of dealing with the new coronavirus pandemic.

More than a third of the coronavirus cases in Kabul have been among doctors and healthcare staff, Reuters reported in early May.

The high rate of infection among healthcare workers has already sparked alarm among medics and some doctors have closed their clinics. At least 5,226 people have been infected by the coronavirus and 132 have died, according to the health ministry.

The attack has shaken the small medical community in Kabul to its core.

Nurses and doctors who survived the hospital attack said they were in shock, and resuming duties would be an emotional challenge on top of the uncertainty caused by the pandemic.

“Last night I could not sleep, as scary scenes of the attack kept crossing my mind,” said Masouma Qurbanzada, a midwife who saw the killings.

“Since yesterday my family has been telling me to stop working in the hospital, nothing is worth my life. But I told them ‘No, I will not stop working as a health worker’.”

Officials at MSF said they were working to try to normalise operations and had received support from other hospitals to treat dozens of infants and adults wounded in the attack.

Some medics at the hospital, however, said it would be hard to move on.

“The gunmen blew up a water tank and then started shooting women. I saw a pool of water and blood from the small gap of a safe room where some of us managed to lock ourselves,” said a nurse with MSF, who spoke on condition of anonymity.

“I saw patients being killed even as they begged and pleaded for their life in the holy month of Ramadan. It is very hard for me to work now.”