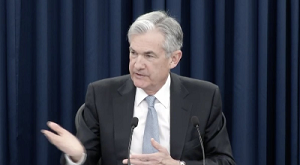 June gold futures rallied to session highs as Powell started to speak during a webinar hosted by the Peterson Institute for International Economics. He reiterating his call that the central bank would continue to do whatever it took to support the U.S. economy that has been devastated by the COVID-19 pandemic.

However, the rally hit a brick wall after Powell outright rejected the idea of introducing negative interest rates.

“Negative rates is something we are not considering, we have a good tool kit,” he said. “The tools we are using: forward guidance and asset purchases work and that is what we will be using.”

BREAKING: #Gold prices are back down to pre-#Powell levels after he pushed back on the idea of introducing negative interest rates in the U.S. June gold futures last traded at $1,714.20 an ounce, up 0.43% on the day | #kitconews | pic.twitter.com/P59ZuwC2lJ

Powell also went back and forth on his outlook for the U.S. economy. He noted that the U.S. economy was in a good position at the start of the year and the virus is the cause of the unprecedented downturn.

He added that although the Federal Reserve and the federal government have taken historic measures to support the economy, more may be needed. He also said that the virus has created an environment of significant uncertainty.

“While the economic response has been massive, it might not be over,” he said.

Powell said that fiscal policies are needed during such uncertain times and that they are worth avoiding a significant long-term economic downturn.

Overall, Powell tried to strike an optimistic tone as he sees an economic recovery on the horizon. The question that remains is how long the recovery will take.

“It will take some time to get back to where we were but we can get there. The economy should substantially recovery once the virus is under control,” he said. “There is a growing sense that recovery will come more slowly but it will come.”

#POWELL: Results from a deeper and longer recession could be low productivity growth and stagnant incomes | #FED | pic.twitter.com/n1vjEPtp9i