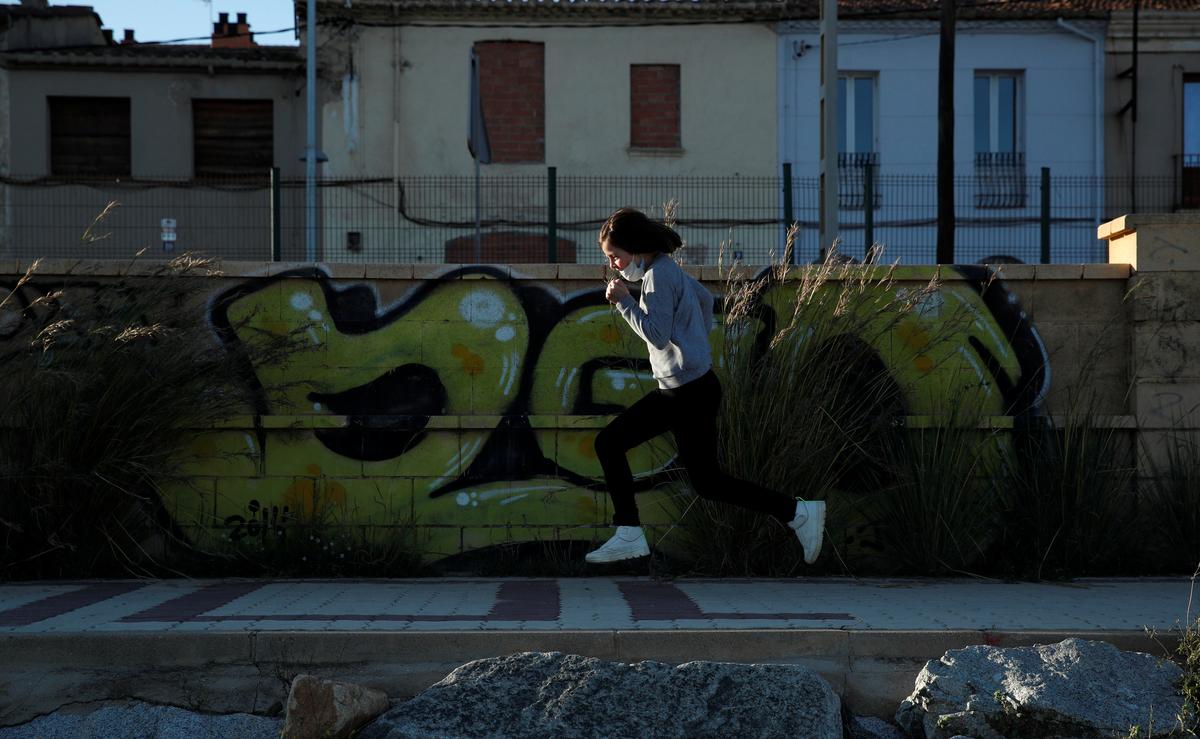 (Reuters) – Spain recorded its lowest daily coronavirus death tally in six weeks on Thursday, but data showing the economy shrank by the widest margin on record in the first three months of the year laid bare the heavy cost of measures to control the outbreak.

A child wearing a protective mask runs on a pathway, after restrictions were partially lifted for children, following the coronavirus disease (COVID-19) outbreak in El Masnou, north to Barcelona, Spain, April 29, 2020. REUTERS/Albert Gea

Spain has had one of the world’s worst outbreaks with more than 24,000 COVID-19 fatalities and in mid-March imposed one of the strictest lockdowns, though officials are confident the worst has passed and want to start easing measures next week.

Across the country, devastated businesses are contemplating how to return to normal in an environment where meticulous hygiene and social distancing will be of paramount importance.

“They force us to take measures – but it is impossible to get what they ask for,” said Livia Patare, a hairdresser on the Canary Islands who can open on Monday. “Yesterday I went crazy going to pharmacies and establishments looking for gloves.”

Beaches and hotels lie empty in a tourism sector that is one of the biggest contributors to the economy. Another big driver, construction and real estate, is at a standstill after only just recovering from the 2008 financial crisis.

“This crisis will be worse for hotel workers than 2009 was for construction. At least then we still had tourism,” said Francisco Rullan, who works at a hotel on the holiday island of Mallorca.

The number of fatalities related to the coronavirus recorded overnight in Spain fell to 268, the lowest since March 20, according to the health ministry. Cases rose to 213,435 – in a population of 47 million – from 212,917 the day before.

Spain’s economy shrunk by 5.2% in the first quarter compared to the previous period, preliminary data showed, with household spending plunging 7.5% as people hunkered down at home with most shops, bars and restaurants closed in March.

On Tuesday, Prime Minister Pedro Sanchez outlined a four-phase plan to lift the lockdown with a planned return to normality by end-June.

Under the plan, hairdressers and other businesses that operate via appointment will open from Monday, while restaurants will be able to offer takeaway services.

By the end of June, beaches will be able to reopen.

Different areas of the country will progress through the stages at different rates depending on how the rate of infection evolves and other criteria like compliance with social distancing rules.

Sandra Bullock sells Georgia beachfront estate for $4.2M
NBC Sports Network will shut down in 2021 and sports rights will move to USA Network
Microsoft is investing and partnering with GM’s Cruise on self-driving cars
Your Next 2 Reads, Based On Your Favorite Type of Exercise
14 Adult Fairytales for the Young at Heart