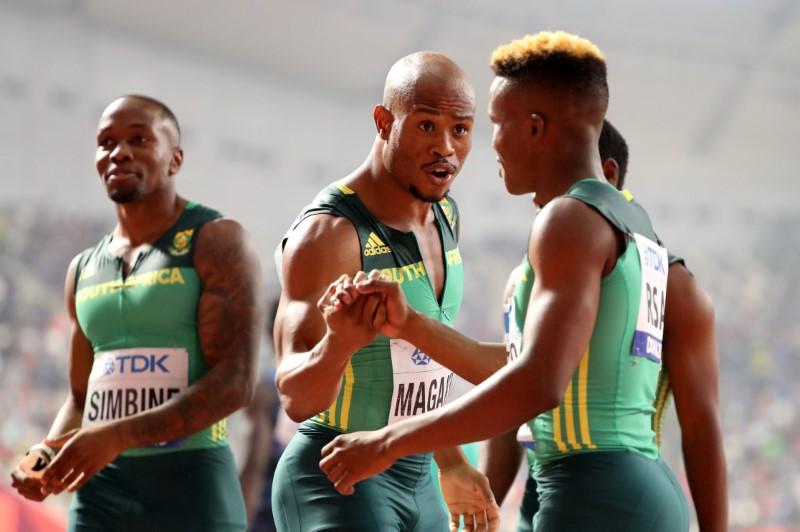 JOHANNESBURG (Reuters) – South Africa’s male quartet can improve on their fifth-place finish in the 4×100 metres relay at the world athletics championships last year and clinch a medal at the 2020 Tokyo Olympic Games, the national relay coach said on Thursday.

The team are well aware of the fierce competition they face, particularly from the Americans, who clocked the second fastest time ever at 37.10 seconds in Doha to end a 12-year gold medal drought.

South Africa, anchored by Commonwealth Games 100m champion Akani Simbine, finished in 37.73 seconds after setting an African record of 37.65 seconds in the heats.

Newly-appointed relay coach Paul Gorries said in an emailed interview with Athletics South Africa (ASA) that the time South Africa ran in Doha was good but the team still has room for improvement.

“We came back home and analysed it and there’s still a lot more we can do with the changeovers, and there’s a lot of work to be done on where we exchange the baton in the zone,” he said.

“So if I can get what I want from the guys at the training camps, with the assistance of people who are working with me, I’m sure we can run way under 37.60 and that will definitely put us in the medals.”

The national relay team last clinched a medal at the 2018 Commonwealth Games when the foursome, led by Simbine, won silver with a time of 38.24 seconds.

At the 2001 world championships in Edmonton, the team clocked 38.47 seconds to win gold for the first time.

As part of the selection criteria Gorries is looking at those who are running 10.10 seconds or faster over 100m, as well as the 200m athletes, to cover the first and third legs for the team.

While in the men’s 4x400m, low 45 seconds and under would suffice for qualification. Gorries believes the 4x400m team can also win a medal too, “but we’re going to need at least two guys who can run 44 seconds this season, in order for them to have a realistic chance.”

The 4x400m quartet ran in Doha without 400m world record holder Wayde van Niekerk, who is yet to make a full comeback from a knee injury.

ASA has already named a 56-member preparation squad for the Tokyo Games, but the final team will be announced by the South African Sports Confederation and Olympic Committee.