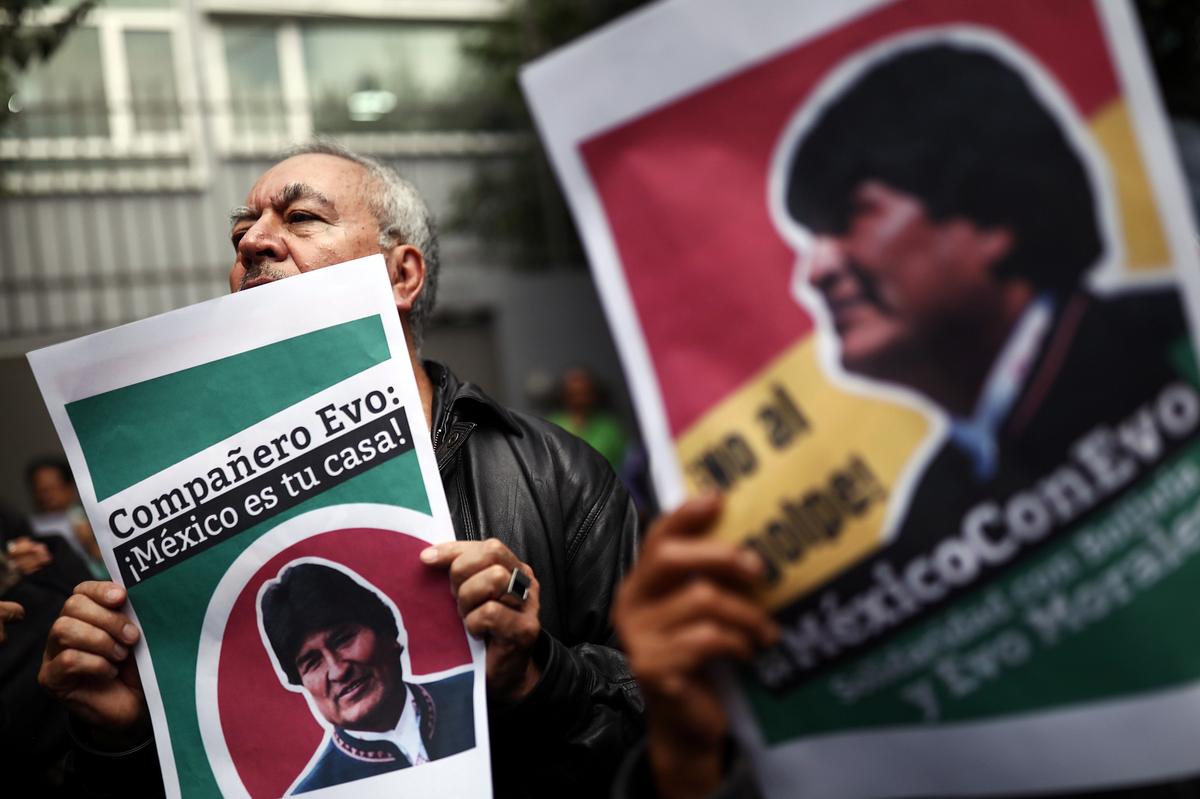 LA PAZ (Reuters) – Bolivia’s military and police deployed in the streets of La Paz on Monday night to stem violent clashes feared with thousands of supporters of ousted president Evo Morales, even as the leftist leader boarded a plane to take him to political asylum in Mexico.

A man holds a sign during a demonstration in support of Bolivian President Evo Morales after he announced his resignation on Sunday, outside the Bolivian Embassy in Mexico City, Mexico, November 11, 2019. The sign reads, “Evo, mate, Mexico is your home”. REUTERS/Edgard Garrido

Morales, who was the country’s first indigenous president, boarded a Mexican government plane from the central Bolivian town of Chimore, a stronghold of his supporters where he retreated over the weekend after weeks of protests over a disputed election win loosened his grip on power.

In a tweet he confirmed he was departing for México, but pledged to return with more “strength and energy.”

Mexican Foreign Minister Marcelo Ebrard said on Twitter that Morales had boarded the plane “to ensure his safe journey to our country.”

Ahead of the news of Morales’ departure, the police and armed forces chiefs said they would roll out on the streets to quell acts of “vandalism” posing a threat to citizens.

Armed Forces Commander Williams Kaliman told journalists in La Paz that troops would use “proportionate force against acts of vandalism groups that cause terror in the population.”

Police chief Yuri Calderón added: “This mission begins today and will end when peace is restored throughout the Bolivian territory.”

Thousands of Morales supporters were on Monday headed toward La Paz from the nearby city of El Alto.

Around La Paz’s central Murillo square and other parts of the city, opposition protesters erected roadblocks made of metal scraps and other debris, as tension mounted following Morales’ resignation on Sunday.

Police officers in the unit charged with protecting the city’s legislative assembly, told Reuters they were expecting a serious confrontation. One said they would use live ammunition, and the police chief said on TV he was seeking military support.

“It’s very worrying. There was a lot of fear and panic last night. I think people are similarly if not more scared this evening,” a Western diplomat in the city said, adding that most embassies had been shut with staff working from home.

“The danger is a bit indiscriminate. So people can easily get caught up in something,” the diplomat said.

Legislators, who had been discussing the nuts and bolts of a potential provisional government on Monday in the assembly under heavy police guard, were later evacuated, one lawmaker said.

The departure of Morales, part of a wave of leftists who dominated Latin America’s politics at the start of the century, followed weeks of violent protests over allegations of fraud in the Oct. 20 election.

The 60-year-old former llama herder and coca leaf farmer was viewed by many as a champion of the poor who brought steady economic growth, but to others he was an autocrat who overstepped by defying a referendum on presidential term limits.

His government collapsed on Sunday after the Organization of American States (OAS) delivered a damning report into serious irregularities during the October vote, prompting ruling party allies to quit and the army to urge him to step down.

The audit found “clear manipulation” of the count and “serious security flaws,” which the OAS said meant the result should not stand and new elections should be held.

Foes celebrated Morales’ departure but also moved to find a temporary successor before a presumed new election in the landlocked nation that is one of South America’s poorest, dependent on farming and natural gas.

With Morales’ deputy and many allies in government and parliament gone with him, opposition politician and Senate second vice-president Jeanine Anez flew into La Paz saying she was willing to take control. She was later taken by the military to the legislative assembly.

“If I have the support of those who carried out this movement for freedom and democracy, I will take on the challenge, only to do what’s necessary to call transparent elections,” said Anez, who is constitutionally next in line to assume the presidency.

Speaking tearfully about the crisis, she said the Senate would look to hold a session on Tuesday and urged members of Morales’ Movement for Socialism (MAS) party to attend to find a constitutional solution and interim president.

Morales’ resignation still needs to be approved by the Legislative Assembly, convened by both chambers of Congress. The Assembly said it planned to meet at 4 p.m. (2000 GMT) on Tuesday, though with clashes gripping the city it was not yet clear if it would go ahead.

Overnight on Sunday, gangs had roamed the highland capital, businesses were attacked and properties were set on fire. Schools and shops were largely closed, while public transport halted, roads were blocked, and rival political groups clashed on the streets.

Bolivia’s Armed Forces said it would move to protect essential public services amid rising violence and vandalism that has seen electricity and water services cut in some areas.

“I am afraid of what will happen, everything is a mess in the city. There are fights between neighbors,” said Patricia Paredes, a 35-year-old secretary in La Paz.

Morales repeated on Monday accusations that he was the victim of a conspiracy by enemies including election rival Carlos Mesa and protest leader Luis Fernando Camacho. “The world and our Bolivian patriots repudiate the coup,” he tweeted.

In a sharp change of tone later in the evening he called on his “people” to be peaceful. “We cannot clash among our Bolivian brothers. I make an urgent call to resolve any differences with dialogue and consultation,” he said.

Argentine President-elect Alberto Fernandez echoed Morales’ denunciations of a coup, as did Mexico. “It’s a coup because the army requested the resignation of the president, and that violates the constitutional order of that country,” Mexican Foreign Minister Marcelo Ebrard said.

In a redrawing of Latin America’s political landscape, the left has regained power in both Mexico and Argentina, though powerhouse Brazil retains a right-wing government.

In Venezuela, opponents of Morales ally Nicolas Maduro also hailed the fall of the Bolivian leader, whom they call a dictator, saying they hoped Maduro would be next.

Further afield, Russia backed Morales, while U.S. President Donald Trump said Morales’ resignation was a “significant moment for democracy” and sent a signal to “illegitimate regimes” in Venezuela and Nicaragua

Under Bolivian law, the head of the Senate would normally take over provisionally. However, Senate President Adriana Salvatierra also stepped down on Sunday.

Bolivia under Morales had one of the region’s strongest economic growth rates and its poverty rate halved, but his determination to cling to power and run for a fourth term alienated many allies, even among his indigenous base.