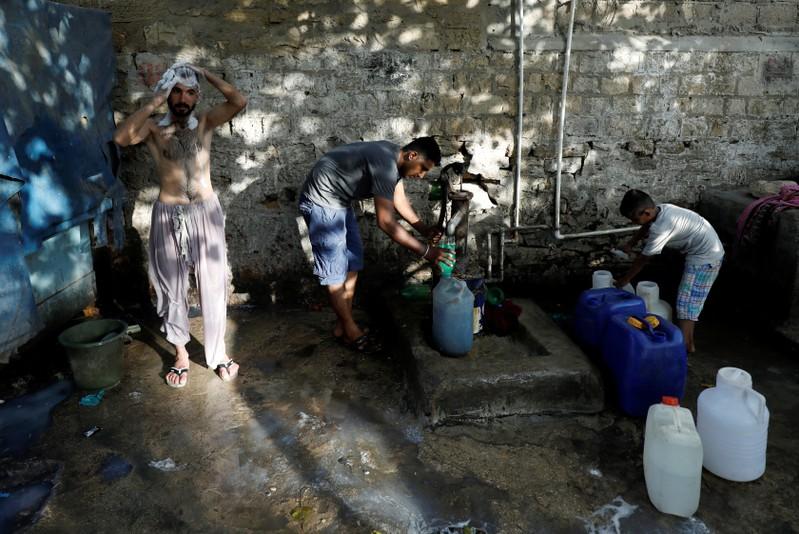 ISLAMABAD (Reuters) – Pakistan’s fiscal deficits are narrowing, the IMF said on Friday as it announced it would release the first tranche of its $6 billion financial assistance programme to the country.

A resident is taking a bath while others fill up water from the tap at a low-income neighborhood in Karachi, Pakistan May 22, 2019. Picture taken May 22, 2019. REUTERS/Akhtar Soomro

The International Monetary Fund agreed the three-year rescue package for Pakistan in April – its 13th bailout programme for the South Asian nation since the late 1980s – as the economic outlook for the country of 208 million people worsened.

“Completion of the review will enable disbursement of SDR 328 million (or around $450 million) and will help unlock significant funding from bilateral and multilateral partners,” Ramirez Rigo, head of an IMF mission to Islamabad, said in a statement after the mission completed its first review of its programme.

“The government policies have started to bear fruit, helping to reserve the buildup of vulnerabilities and restore economic stability. The external and fiscal deficits are narrowing, inflation is expected to decline and growth although slow, remains positive,” the IMF statement said.

The IMF said Pakistan’s near-term economic outlook was broadly unchanged from the time of the programme approval in April, with gradually strengthening activity and average inflation expected to decelerate in the 2020 fiscal year. However, domestic and international risks remain, and structural economic challenges persist, it said.

Pakistan has lifted interest rates over the past year to tame high inflation, which eased to 11.04% in October from 11.37% in September.

The government of Prime Minister Imran Khan, who took power in August, obtained temporary relief from close allies such as China and Saudi Arabia with short-term loans worth more than $10 billion to buffer foreign currency reserves and ease pressures on the country’s current account.

But analysts had called an IMF bailout inevitable, as Pakistan faced an increasing fiscal crunch.

China’s same-sex couples heartened by property protection rights in new civil code
What to know if you’re buying an NYC home during the pandemic
AngloGold Ashanti reports increased cash flow despite lost output
#SuperheroProblems: So Your Family Was Erased from Reality
AT&T launches HBO Max, vying with Netflix, others for quarantine viewing