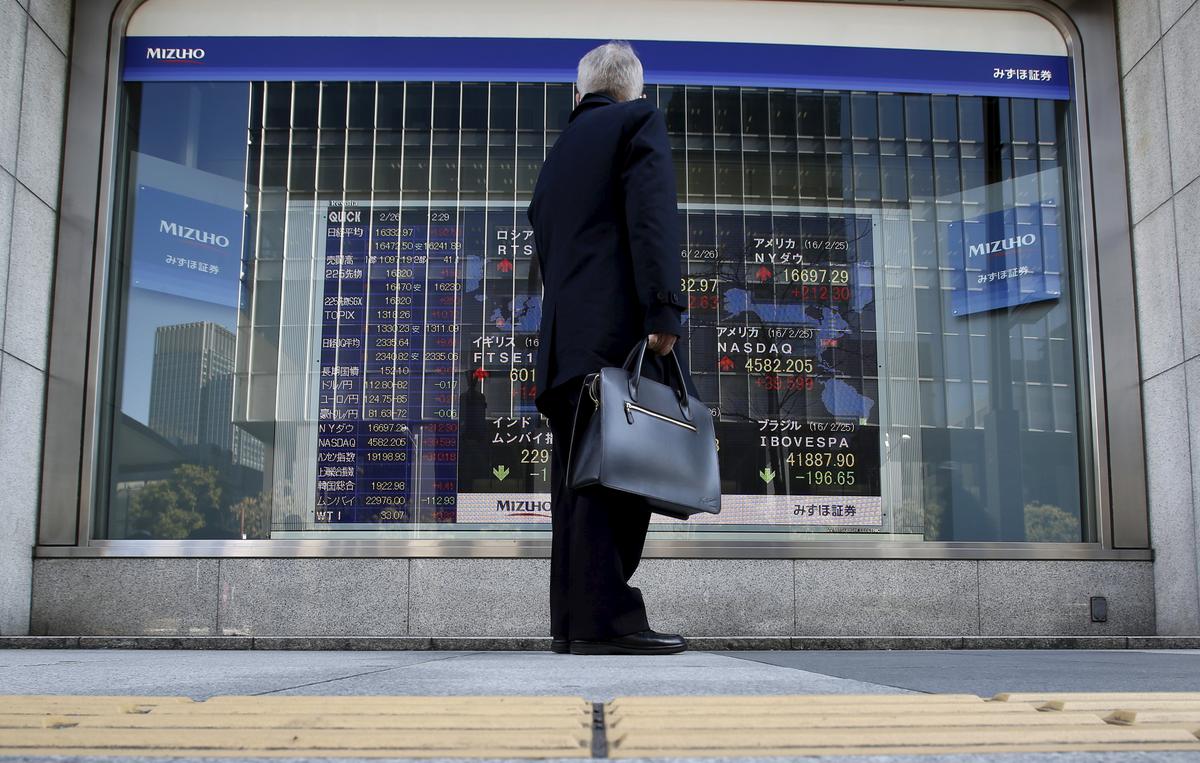 SHANGHAI (Reuters) – Asian stocks edged higher on Friday, tracking the global lift in sentiment after the UK and the European Union struck a long-awaited Brexit deal, but concern about the Chinese economy is likely to cap gains with data expected to show weaker growth.

A pedestrian stands to look at an electronic board showing the stock market indices of various countries outside a brokerage in Tokyo, Japan, February 26, 2016. REUTERS/Yuya Shino

Sterling, which had enjoyed its biggest rising streak since October 1985 and hit a five-month high on the back of the Brexit deal, gave up ground on Friday morning amid doubts that the agreement would receive parliamentary approval. The pound eased 0.18% to buy $1.2865. GBP=

“Whatever was agreed last night with the EU still has to go through the British parliament … The uncertainty surrounding that still hasn’t changed one iota,” said James McGlew, executive director of corporate stockbroking at Argonaut in Perth, Australia.

MSCI’s broadest index of Asia-Pacific shares outside Japan .MIAPJ0000PUS was up about 0.1% in early trade, echoing Wall Street’s small gains. Australian shares were off 0.6%, while Japan’s Nikkei .N225 added 0.5%.

Equity markets had enjoyed a bounce from the initial Brexit news, with the S&P 500 .SPX briefly topping 3,000 points for the first time in more than three weeks.

China is also in focus in Asia with the world’s second-largest economy expected to post its weakest economic growth in at least 27-1/2 years when it releases gross domestic product data at 0200 GMT. Weak numbers could raise pressure on Beijing to introduce new stimulus measures to counter the effects of a long-running trade war with the United States.

McGlew said expectations for a further slowdown in China had been largely priced in by the market already.

“Unless it’s a diabolically low number, I don’t really think it’s going to have too much of an impact on prices today. But we can’t price that uncertainty,” he said, referring to further developments in the trade spat between Washington and Beijing.

On Thursday, China said that it hoped to reach a phased agreement in its trade dispute with the U.S. as soon as possible.

Reflecting the cautious mood, the yield on benchmark 10-year Treasury notes US10YT=RR fell slightly to 1.7483% compared with a U.S. close of 1.755% on Thursday.

The dollar index .DXY, which tracks the greenback against a basket of six major rivals, was barely lower at 97.596.