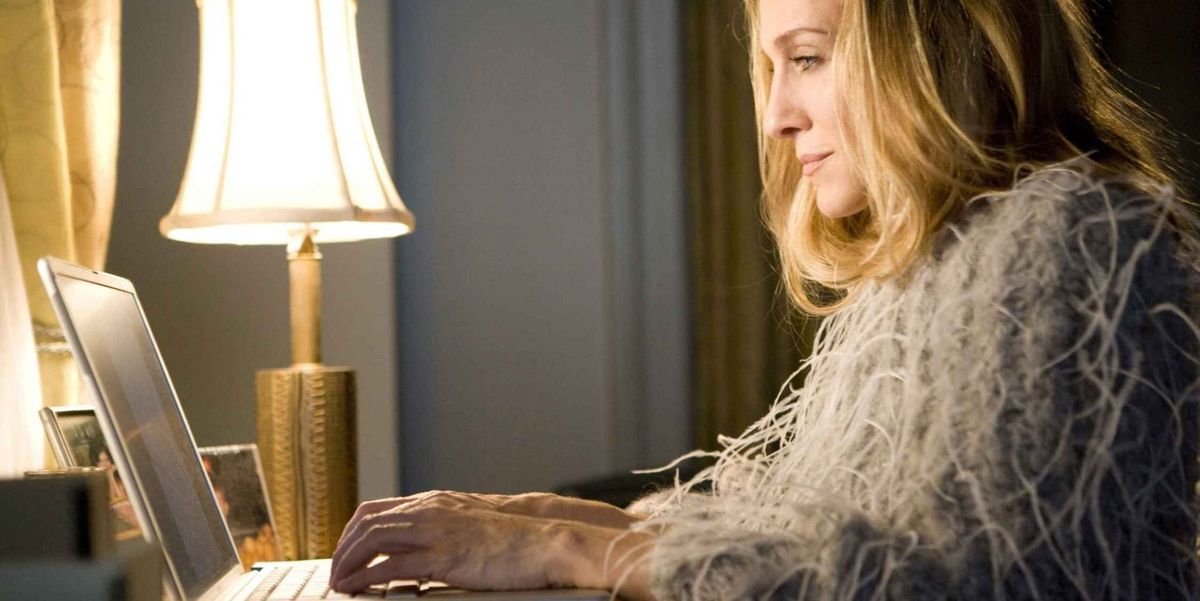 The very first episode of Sex and the City premiered 20 years ago next month. To mark this auspicious anniversary, ELLE.com is celebrating some of its most ridiculous, memorable and controversial moments—from the fashion to the flings.

In a space already oversaturated with “heys” and low-stakes “lol sup” messages, coming up with the right thing to say on dating apps can be hard. How do you start a chill conversation without overthinking things?

Thanks to a general rut with *looks at hand* “casual dating,” I decided to let Carrie Bradshaw run my dating life for a day. The rules were simple: I’d only talk to guys using the OG HBO queen’s most iconic (or cringeworthy) lines. The results? Much like the show’s breaking of the fourth wall, there were inconsistencies.

A very fair answer to an iconic line, tbh.

2. This guy who mansplained monogamy

If a tree falls in a wood and no guys are there to unpack monogamy as a concept, did it really happen?

Thank you, I know it’s asking a lot.

4. The guy who witnessed the most embarrassing autocorrect typo of all time

You and I both, buddy.

5. This guy who was quick to call me tf out! Damn!

I respected him for calling me out until he circled back 21 hours later with that last bit.

Honestly, my own fault for expecting anything less from a dude who used “;)” and “Lol” (with a capital L — everyone knows “lol” lowercase is ironic and Cool)

7. The guy with the panda suit

Is the panda thing a race thing or what’s up with that?

He negged me by calling me a Miranda and honestly, it worked. I gave him my number and he ended up facetiming me immediately so love is truly dead.

Cool…I too had to read Hamlet in the 10th grade.

I love when guys say fancy shit like “intrigued” online because you know IRL he doesn’t even say anything when he flips you over halfway during sex. But yeah, tell me how intrigued you are, old sport.

No, sparkle-emoji-user, I am very real!

In the end, I was thankful for Carrie’s lines. Having a script erased a lot of the pressure I feel when trying to drum up conversation with a stranger. The experiment underlined the fact that most guys are at least willing to *try* with conversation—even if they’re just doing their best to respond to weird, cryptic monologues. If so many people will vibe with Carrie’s corny ass, it’s not like I’m going to be hella judged if my opening joke doesn’t land.

The emotional one-liners were also really fun, because who among us isn’t looking for a soul mate? Women especially spend a lot of effort trying to look chill and casual (“Hahaha I also am dating like, six other people right now, lol, it’s cool! Don’t worry, I definitely did not talk about you like you were my boyfriend to my family or anything!”). Using Carrie’s quotes was a fun way to vicariously live out any and all no-chill fantasies I had about leading with my true monogamous freak flag.

I will admit that I felt a little guilty about the experiment at first. I’m someone who is baseline always a little scared that guys are trolling me (Is every hot guy who’s ever hooked up with me just doing so for some sick She’s All That-like bet?). But then I remembered the guy who took Carrie’s infamous “some women aren’t meant to be tamed,” line as an okay to segue into talking about handcuffs, and then I don’t feel that bad.