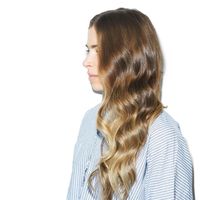 The quick notes on Victory Boyd’s nascent career read like a classic discovery story: She performed alongside her family regularly in New York’s Central Park, delighting tourists and New Yorkers from their spot at the Bethesda Fountain, until one day JAY-Z and Roc Nation magically swept in, gave them a record deal, and forever changed their lives. While life-changing stuff is certainly on the horizon (a new single is dropping on May 11 for starters), Boyd has a smart outlook on the whole “being discovered” thing that seems wiser than her 23 years.

“I think the process of being discovered by people is something that will always be happening,” she says. “I don’t think of it like, ‘That was the day I was discovered!’ because tomorrow I’ll be discovered as well, and the next day.” To that end, she was discovered long before she was “discovered.” Singing with her family since the age of four, she has considered it a profession from the very beginning. As one of nine children, the entire musically inclined family has been featured on local TV and in newspapers for a long time (she was raised in Detroit before moving to New Jersey at age twelve).

To think that Boyd is a simmering supernova about to take off and forget all the little people would be to tragically underestimate just how grounded the artist is. “I was singing in the park three days ago,” she says, adding that she rejoins her family at the fountain whenever her schedule allows: “I’m there when I’m there. I don’t want to say that I don’t sing in the park anymore because my family’s there. Even if I’m not physically there, I’m there if they’re there.” (The Bethesda Fountain is home: The family kept on singing even after the first record deal was inked, with her older brother hand-delivering the signed contract while the others remained in Central Park). That authenticity and confidence and comfort in who she is—and the devotion to the scenic park spot—is the chief reason her relationship with Clarks and its Comfort in Your Soul campaign was such a spot-on fit.

So, back to the non-discovery-discovery story: A mutual friend showed JAY-Z a video of Boyd singing, and he said he wanted to meet her. While the very thought of such a high-stakes meeting might have shaken an average singer, she’s anything but. “I prepared for it mentally because I didn’t want to mess [the meeting up] by being nervous. I had to go in there believing that I could do it. It’s easy to cower down and be afraid because he’s an icon, but he’s a human being,” she says. “The statement, ‘The only thing you have to fear is fear itself’ is very true because fear can be crippling. I give myself that talk every time I go on a major stage. I performed the national anthem for a football game, and I thought, ‘This is a moment of a lifetime. I have to attack this with humility, but also grace and confidence knowing that I can do it and believing that I can do it.’ That’s the key.”

Even with the awe-inspiring voice and the warm, expansive smile, it’s Boyd’s deep comfort in herself that inspires awe. That’s certainly true for Clark’s: The brand asked Boyd if she would want to join their campaign this spring and help champion the idea that you need to be comfortable with yourself. Boyd is incredibly rooted and knows who she is. Even more impressively, she’s already developed an inspiring outlook on the responsibility and power that come with a spotlight.

“Artists have this freedom to be themselves. We have the power to change what culture says is beautiful and acceptable, to be the voice that says, ‘It’s OK to be like this.’ It gives comfort and leadership to people who are just like them but don’t have the same power,” she says. “For example, I can do something without people making fun of me, whereas someone in high school might not have that clout amongst their peers. If I’m not comfortable enough to wear my natural hair or be comfortable in my weight, how are other girls who are just like me supposed to have the courage? The girls in school with people making fun of them for how their hair looks—people aren’t laughing at my hair, they’re saying, ‘Your hair’s cool!’ If I give up, it’s going to make it harder for them. That’s the responsibility of the artist.”

Another responsibility that falls to the artist is looking at everything around them, finding a lesson that can be presented poetically, and translating it for the rest of us. That’s how Boyd has looked at songwriting, and, luckily, the standard perils of digital life make rather good fodder.

“I’ll just be observing life, and something triggers an idea, like ‘That will be a brilliant song!’” she explains. “I’m working on a song right now where the concept is that we judge people based off their Instagram feeds. I caught myself doing that recently, and the thought came to mind, ‘Everyone that’s a good person isn’t necessarily a photographer.’” Follower count doesn’t correlate with talent or kindness or any other real-life characteristic—and Boyd’s work as an artist is to craft that message in a way that resonates.

So, what does the future hold? Her debut album, “The Broken Instrument,” will be released on June 15, followed by a nation-wide tour, and she’s continuing to hone her craft as a songwriter and producer, writing for other artists along with herself. She might attend college someday, but there’s no pressure; life is turning out to be plenty educational.

“Apply yourself in a very rigorous way, like you would in school—that’s the bottom line,” she says. “You’ll get rewarded. If you sow, you’re going to reap. If you invest, you’re going to get a return. As long as I’m investing and working very hard, I’ll be OK.”