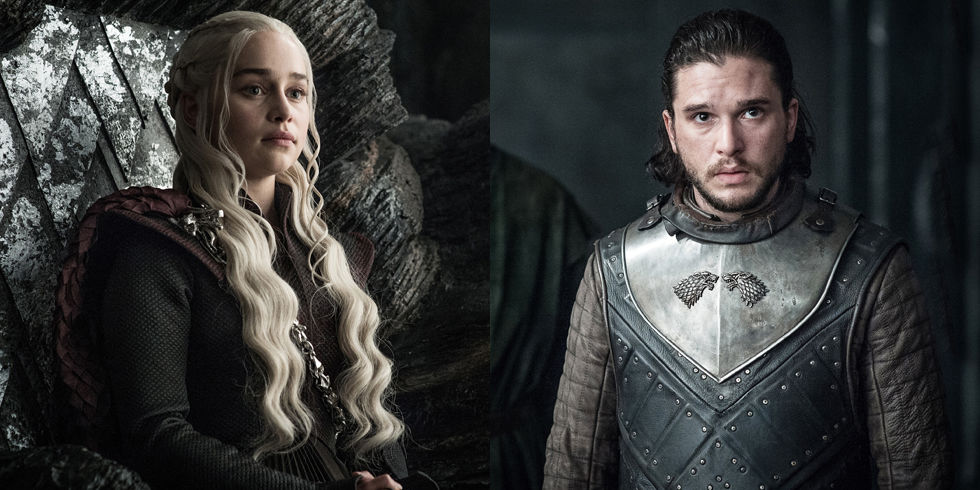 It’s basically impossible to watch Game of Thrones and not get sucked into the fan theory vortex. We are now living in a time of episode-by-episode theories and here are this week’s, ranked from least to most likely to come true.

Daenerys Targaryen and Jon Snow will get married and/or make out immediately upon meeting each other.

This week’s episode brings us the long-awaited meeting of Jon Snow and Daenerys Targaryen. Fans have been eagerly anticipating this moment for years for a number of reasons.

First, the book series Game of Thrones is based on is called A Song of Ice and Fire, which couldn’t scream: THIS SERIES IS ABOUT JON AND DANY more unless it were called Several Books About a Mopey Man from the North and an Amazing Fireproof Queen. Second, both characters nicely fit the prophecy about Azor Ahai, the one person who can save the Seven Kingdoms from the White Walkers. Third, people are thirsty AF for Jon and Dany to get together. They’re probably the only couple shipped as OTP who go more than six seasons without meeting once.

Because the thirst is so real, there’s talk about love at first sight for Jon and Dany. While there might be some lust at first sight (Targaryens are into marrying within the family), it’s much more likely that these two will butt heads at first—probably in a big way.

Tyrion will be fired as Hand of the Queen.

Last week’s episode saw Tyrion writing personally to Jon Snow to ask him to come meet with Dany in Dragonstone. The only problem? Dany specifically said she wants Jon to bend the knee and Tyrion conveniently left that detail out of his letter.

Meaning? Jon is about to show up to Dragonstone completely NOT prepared to bend the knee and Dany is unlikely to be cool about that. After the way she tore into Varys last week, some fans worry she might turn on Tyrion for this omission. While there’s a good chance Tyrion will get a stern talking to, it seems like a stretch that Dany would fire or demote him for this.

It does, however, seem reasonable that this might be the final push she needs to take Olenna Tyrell’s advice to act like a dragon (aka attack King’s Landing with all of her fire power).

This theory springs from Varys’ grand speech about his loyalties lying with the realm, rather than with any one ruler. Dany is the best ruler he’s found for the realm, but he hasn’t met Jon Snow yet. Where Dany wants power and a seat on the throne, Jon does not. He only accepts power because he feels a responsibility to the people who look up to him—and that’s basically Varys’ definition of a good ruler.

After Grey Worm and Missandei finally took their love to the next level, people started to fear for the popular couple’s safety. Thrones loves to dangle happiness in front of characters just before killing them off.

Grey Worm is on his way to Casterly Rock for battle and it wouldn’t be surprising if he didn’t make it out alive.

Cersei’s gift will be Ellaria.

When Euron Greyjoy met with Cersei, he promised her the greatest gift in the Seven Kingdoms as a way to woo her for marriage. Last week, he overtook Yara’s navy and captured not just his niece, but Ellaria Sand and her only surviving daughter, Tyene.

Since Ellaria was responsible for the murder of Cersei’s only daughter, Myrcella, there’s a good chance that her revenge (or her “justice” if this is what the episode’s title, “The Queen’s Justice,” refers to), involves Tyene dying while Ellaria watches.