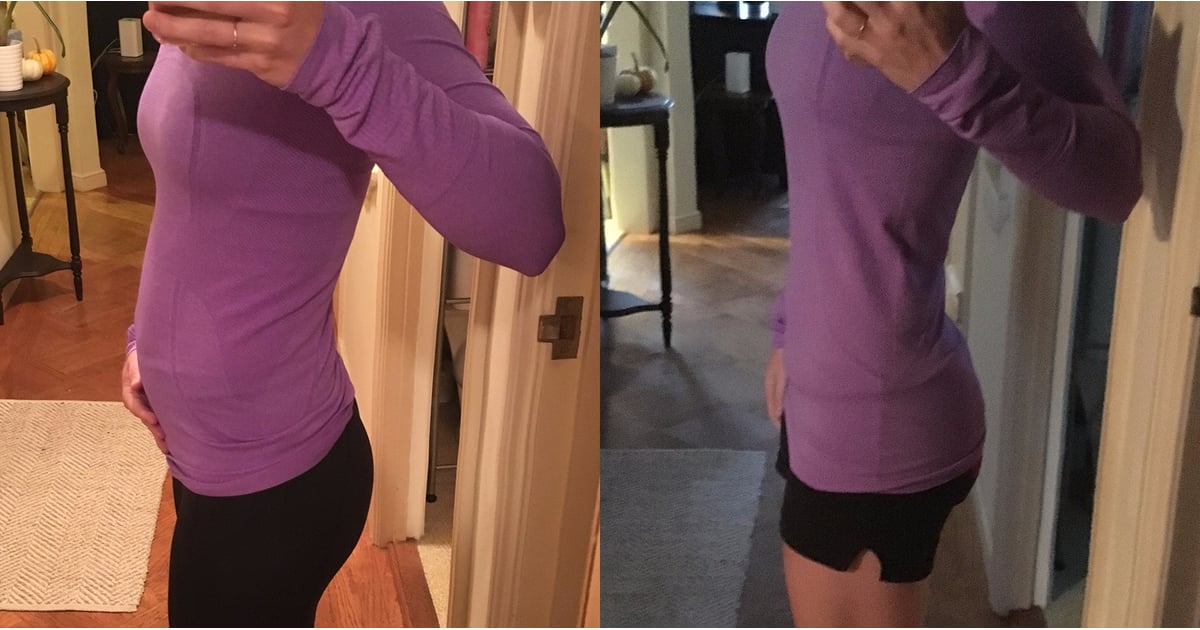 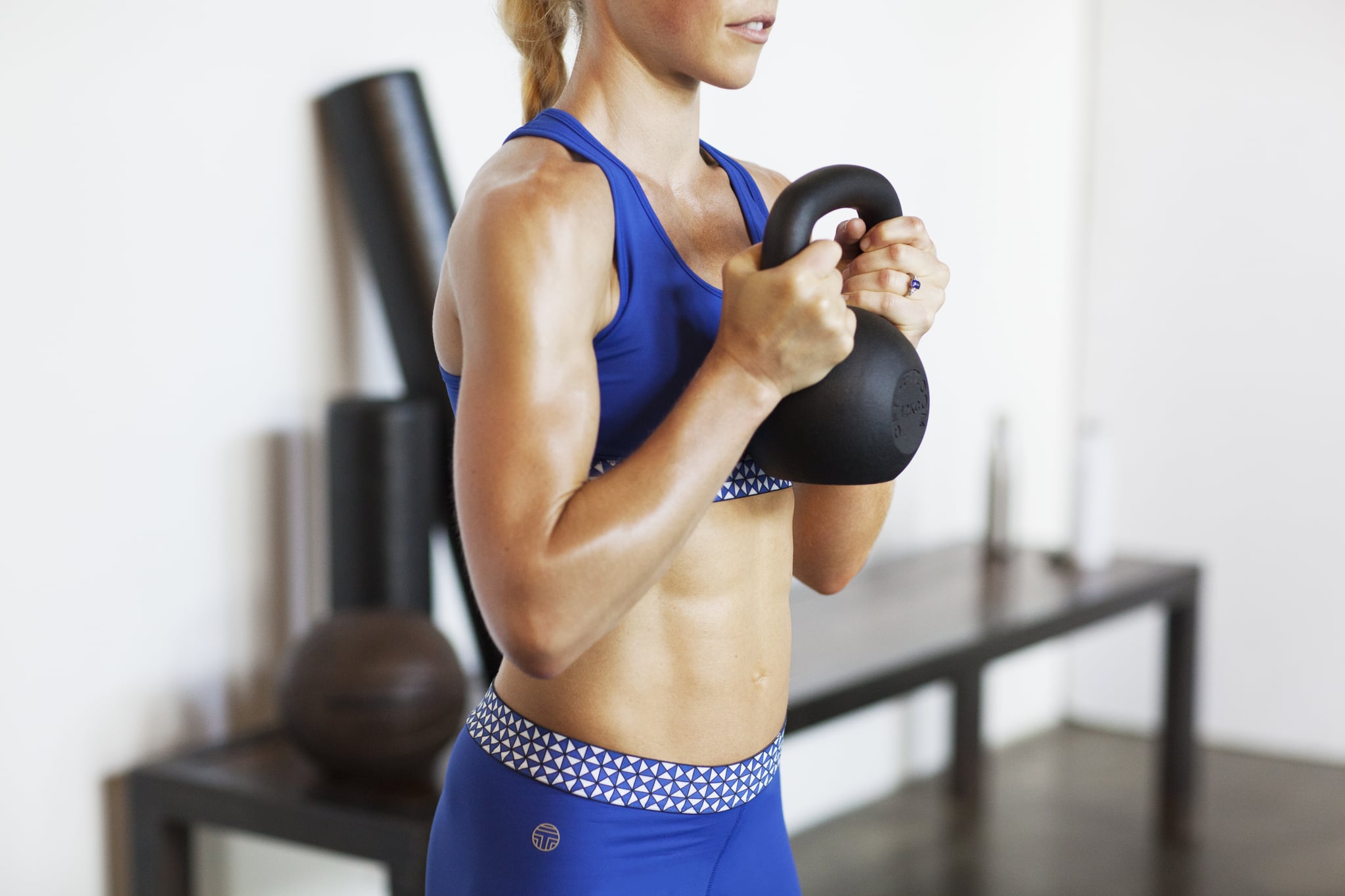 A lot of things changed when I moved to San Francisco. I was much colder. I bought my first real jacket. I tried Philz Coffee for the first time. I started a new job. And, out of nowhere, my stomach started ballooning arbitrarily throughout the week making me look three-to-six-months pregnant at any given moment, for no apparent reason.

Things that didn’t change: my diet, my exercise routine (OK, I started doing a lot more SoulCycle), and my overall health. I wasn’t eating more food or less healthy food, so I knew it wasn’t weight gain . . . especially when my pregnant-looking belly would mysteriously disappear by morning, and I was back to a flat stomach. But sometime during the day, I’d eat a peach or go to a cardio workout, and BAM: back to bloat. Biiiig bloat. I would snap photos to send to my mom (as you’ll see below) because I couldn’t believe what was happening to me, and I was horrified.

For 11 months, I wasn’t comfortable with my body. I couldn’t wear fitted clothing (aka, ALL of my activewear), because I knew at some point, my lower abdomen would jet out, and anyone who didn’t know me would assume I was with child. I’ve been so afraid to eat, because I knew that anything could trigger my stomach, from a piece of fruit to a sip of sports drink. Yet then there would be days when I said “eff it!” and ate Cinnamon Toast Crunch and milk, and nothing happened. It made absolutely no sense.

I’ve never felt more more ashamed of my appearance, or more uncomfortable in my own skin . . . and I’m even ashamed to admit that! My body simply didn’t feel like mine. And the worst part was that it didn’t seem like there was an explanation or end in sight. 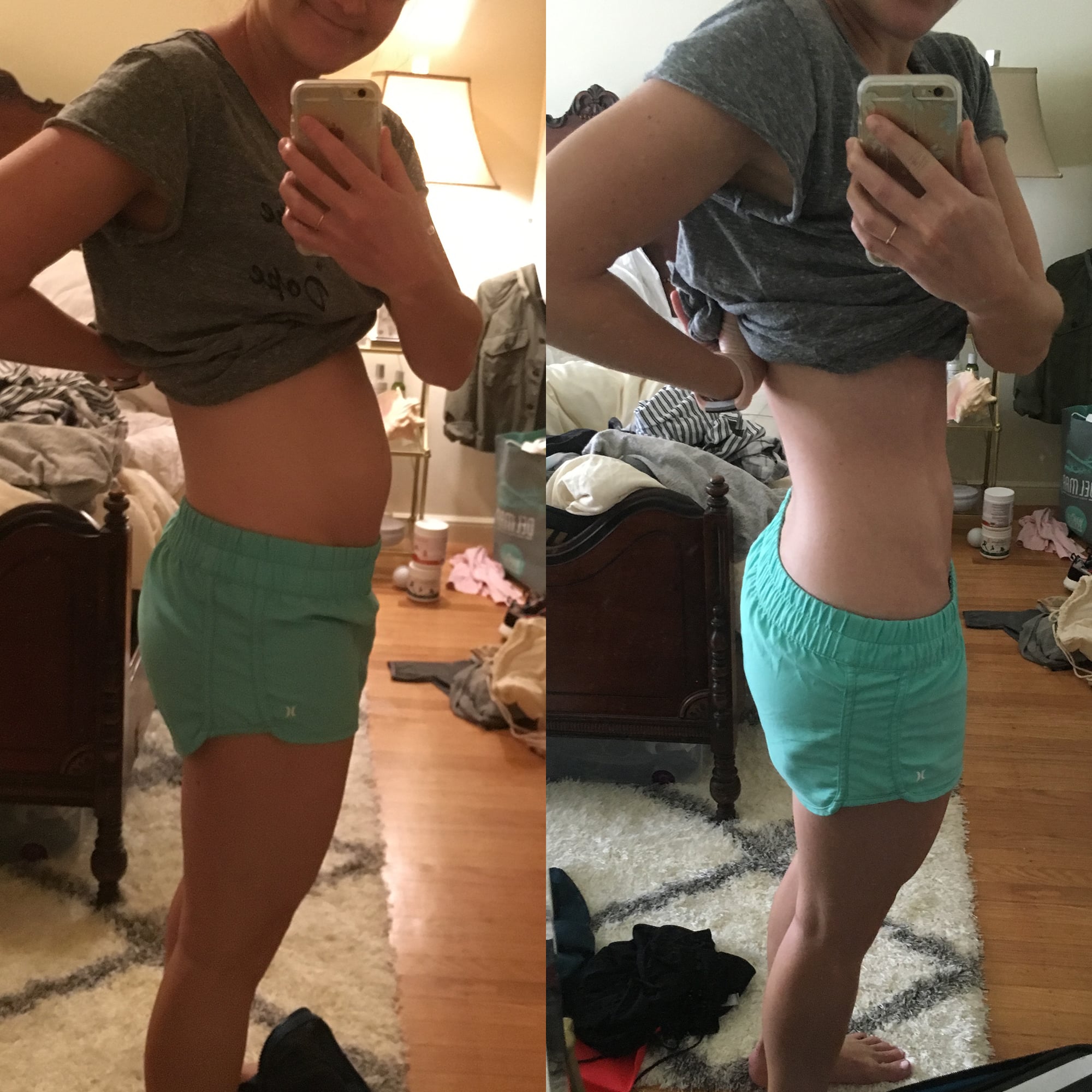 I never intended for these photos to see the light of day, but this is what I looked like end-of-day versus the next morning. I know my room is a mess. This was truly only supposed to be for my mom (she’s mad about the mess, too).

I saw so many doctors and went through so many labs; my initial appointment was to see if it was hormonal. It wasn’t. I saw an OB-GYN. I had two ultrasounds. I tried the low-FODMAPS diet (it didn’t go well). I had my blood tested for a thyroid imbalance. My doctors were stumped, and I was frustrated to the point of many angry tears.

“For 11 months, I wasn’t comfortable with my body . . . I’ve never felt more more ashamed of my appearance.”

Two glimmers of hope seemed to come at once: my doctor referred me to a phenomenal GI, and one of my close friends referred me to an acupuncturist and naturopathic doctor here in the city. Although I had been through so many appointments and tests already with no results, I tried to remain optimistic. And these were still two avenues I hadn’t tried!

First up was my acupuncture visit with Dr. Magnolia Ng of Advance Health SF, and then my GI appointment with gastroenterologist, Dr. Daniel Conlin. Two very different doctors from very different backgrounds seemed to know the source immediately: stress. It was the first time anyone had brought up the idea that something mental could trigger such a strong physical reaction, but they both seemed certain. Stress was the one factor that did come into play when I moved. Long-distance move to a new city, new job, new everything equals one stressed out me. I didn’t even notice because everything has been so go-go-go.

Dr. Conlin didn’t cut any corners in his approach, and he didn’t just write me off saying, “you’re stressed, just calm down!” and send me on my way after collecting a copay. He tested my blood and breath for celiac, SIBO, h. pylori, IBD, and post-infection bacterial overgrowth (everything came back negative). He asked me to eliminate dairy, despite the fact that he didn’t really think I was lactose intolerant. He went through so many avenues, but kept coming back to the idea that it was probably stress-induced. I asked him if I was a “freak case” or if he had seen this in other patients, and he said, “You’re definitely not alone; I see this in many young women your age, typically high-achieving, A-type college grads who work here [in San Francisco] in some kind of fast-paced tech or startup company.” It was like he read my bio. He knew. I knew. It was stress. 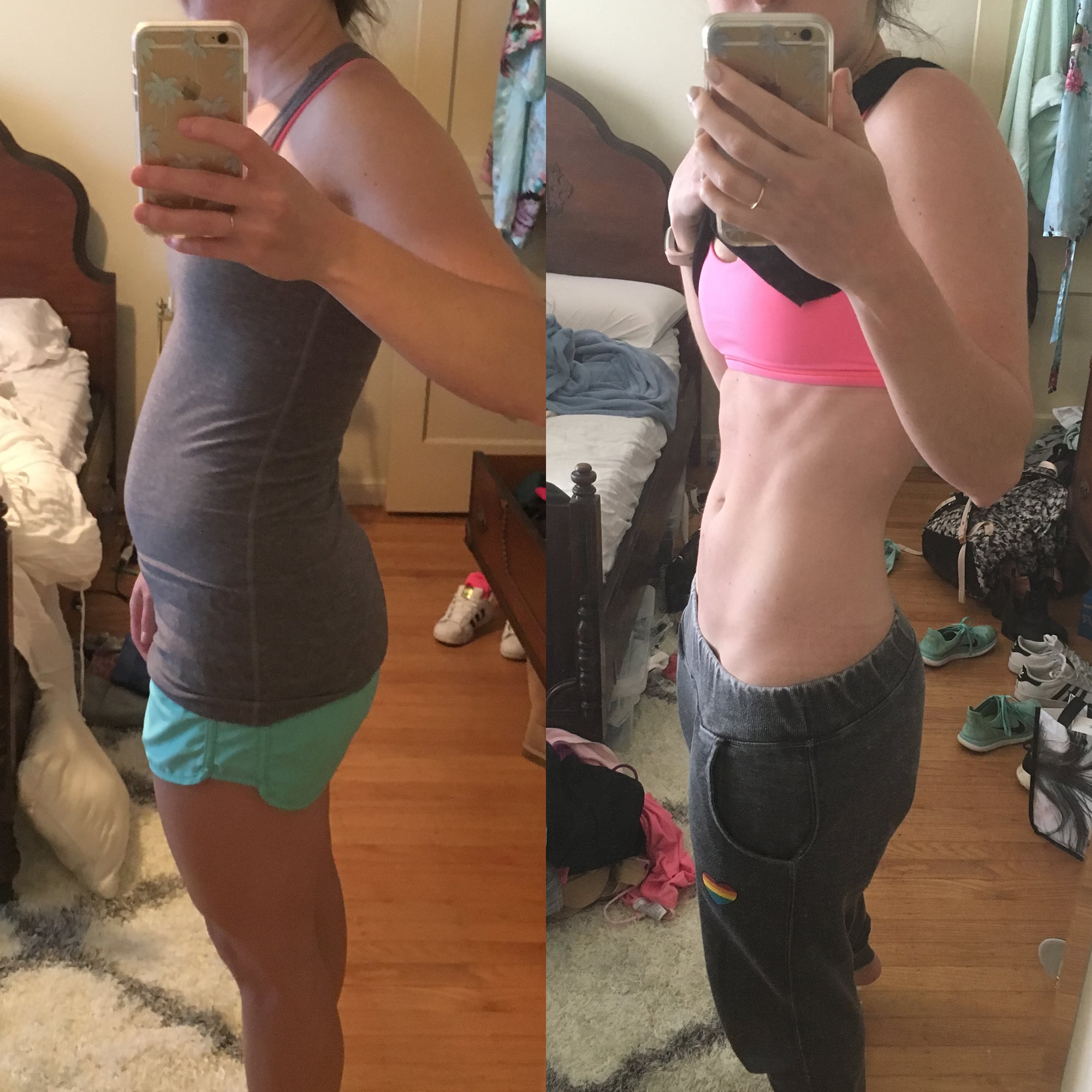 Exhibit B of the stress bloating and the next morning’s mystical disappearance. I swear I’m not usually this messy.

What I appreciated most about Dr. Conlin was his approach to treatment. He said if it was a celiac or SIBO case, he’d have different recommendations, but for me, he thought acupuncture, charcoal tablets, ginger root, and ginger tea, and specifically Align probiotics would be helpful in my treatment (he noted that it’s the only brand he recommends, so I went with it). His openness to natural treatment despite coming from a Western background increased my trust in him and made me more comfortable in my health journey.

It was hard to explain to family and friends that stress was causing arbitrary abdominal distention, so I wanted to learn more. Apparently, an influx of stress can upset the microbiome (the ecosystem of good and bad bacteria in your gut, which can influence nearly all areas of your health). I spoke with Amie Valpone, nutritionist and founder of TheHealthyApple.com, who gave me some incredible insight as to what has been happening in my body. “Having too much non-beneficial bacteria in your gut has been linked to many health issues such as heart disease, fibromyalgia, eczema, asthma, depression, cancer, autoimmunity, allergies, obesity, autism, and allergies,” she said . . . and in my case, inexplicable abdominal distention.

“We are so caught up in our busy lives that we don’t realize how stressed out we are — that’s when the health issues start to appear out of nowhere.”

“When our microbiome is out of balance from stress, we get an imbalance of non-beneficial bacteria such as yeasts, parasites, and bad bacteria that take over and make us feel bloated, tired, and bring along a host of unwanted symptoms that range from person to person.”

She went on to say that “change in diet, travel, processed foods, and stress from work, our family, friends, and so forth,” can trigger this imbalance, but “we are so caught up in our busy lives that we don’t realize how stressed out we are — that’s when the health issues start to appear out of nowhere.” It was amazing to hear those words of affirmation, because that’s exactly what I had experienced. It was totally out of nowhere, and I truly had been so caught up in my busy life.

My gut was off thanks to stress, which caused the inexplicable bloating (that couldn’t be attributed to anything I was eating) and the mission now was to use different natural remedies together to restore balance and get me out of a place of stress (that’s a work in progress, honestly). “The goal is to address the underlying root cause of why your gut is imbalanced in the first place, instead of covering up your symptoms with a Band-Aid approach,” said Amie. “That’s where food, stress, mind-body practices, and probiotics come into play.”

Dr. Ng had an additional approach to pair with my acupuncture treatments for both stress and energy blockages in my abdomen: Chinese herbs. She prescribed and gave me a bottle of Mu Xiang Shun Qi Pian, or “BloatEase,” to take three times a day. “Emotional upset such as frustrations or worry, overwork, and a constitutional or genetic weakness can make a person prone to digestive disorders,” she told me. The herbs and the acupuncture were intended to set things right again. She also mentioned to me the importance of using both traditional Eastern medicine in combination with Western medicine — and my recovery has been a testament to that. 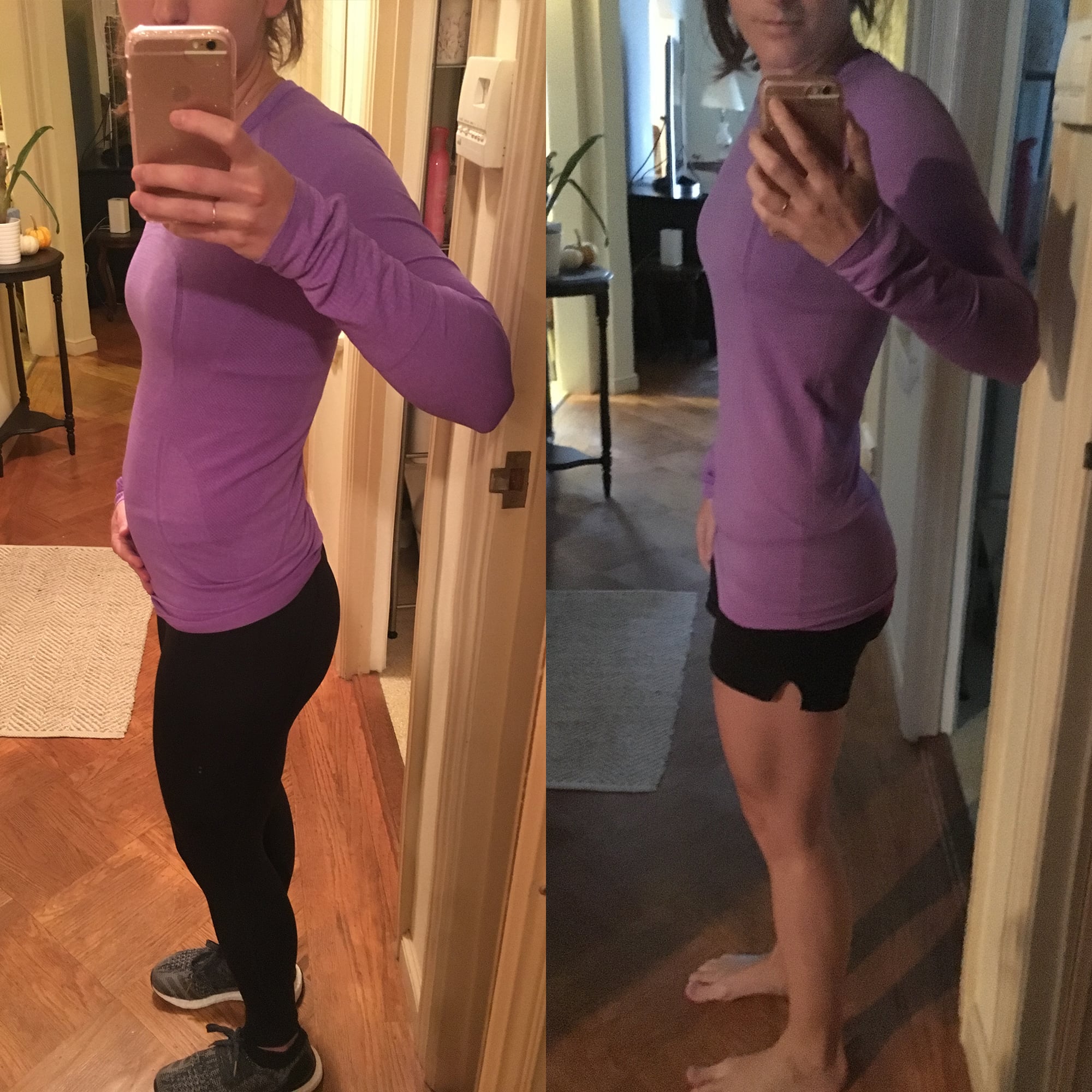 The combination of treatment has been absolutely life changing for me. The Chinese herbs, probiotics, and acupuncture treatment (along with continuing to eat a balanced diet, getting enough sleep, and staying on my workout schedule) has helped restore my body to its natural shape. The bloating is going away, even though I still have to work on de-stressing. When it does happen, the bloating has decreased in size, severity, discomfort, and frequency, and I’m finally starting to feel comfortable with my body again.

What did I learn from all this? For one, Western and Eastern medicine aren’t mutually exclusive, and in fact, when they’re used together, they’ve got a symbiotic, 360 approach that can be even more effective than if either were used on their own.

I’ve also learned to advocate for my health. If you’re not getting answers, don’t give up. Make another appointment. Bug your doctor. Ask for another referral. Don’t take no for an answer. The world of healthcare is freaking nuts, and if you don’t advocate for yourself, no one else will. I got pretty lucky in the way that my doctors were really helpful and responsive when I pushed, but I still had to jump through a lot of hoops to get the treatment I needed. Don’t be intimidated, don’t give up, and most of all, don’t stress. A solution is out there for you, too.