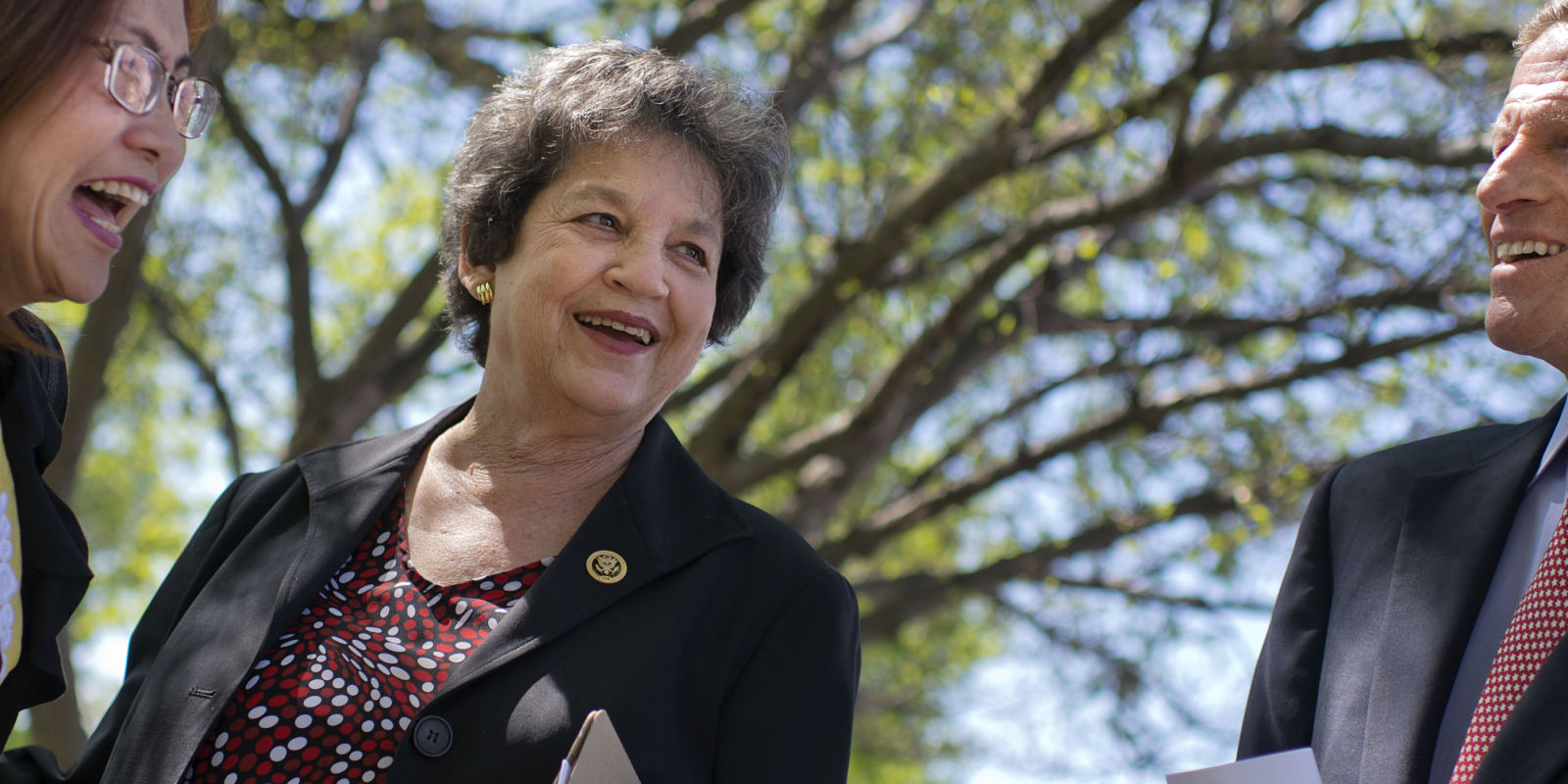 The statistics aren’t good. According to recent estimates, women make up just under 20 percent of Congress and less than 25 percent of all state legislatures. Only six of our nation’s governors are women. But we are 51 percent of the population. And the research shows that when women participate in government, we make it run better, more collaboratively. Historically, women have needed to be convinced to enter politics. But within weeks of the 2016 presidential election, thousands of women announced they plan to run. And we want them to win. So we’re giving them a weekly example of a woman who has run and won. The point: You can, too.

If your heart soared when all the Democratic women in Congress marched into President Donald Trump’s first joint session address dressed in white, you have Rep. Lois Frankel to thank. Frankel came to grasp the power of public protest early, joining the student activist movement in the ’60s, eventually going to law school, and finally running for office. She has served in the Florida State Legislature, the mayor’s office in West Palm Beach, and now in the House of Representatives. Frankel is now the chair of the Democratic Women’s Working Group and the co-chair of the bipartisan Women’s Caucus. Here’s how she ran, won, and eventually learned to navigate the Capitol’s tunnel system.

When I was a young kid, girls were taught that their role in life was to get married and have children. It was the 1950s. Those were the rules. Our generation—we broke out of it. I think of myself as a 1960s person, because I became part of the activism that was going on. I think I have a gene in me to always fight for the underdog, which I’ve done since I was a kid. I never liked the status quo. Once I went to college, I got very involved in student activism. I was a very good student, but I was also a very good student protester [laughs]—Vietnam War, women’s rights, students’ rights, civil rights, environmental movement, you name it. I had a sign for everything. I went to a lot of marches. I went to a lot of rallies. I had no interest in mainstream politics at all. I had such disdain for the political establishment; real disdain. I went off to law school, and I went to Georgetown, which is in D.C., and I never set foot on Capitol Hill at all. Not once. Not for five minutes.

I decided to focus on my own career—to be a really good lawyer. I didn’t know exactly what I would do, but I made up my mind somehow that I wanted to one day be in a position where people would protest me [laughs]. I wanted to make decisions that would have an impact, that were important to people’s lives. I got involved in a criminal justice clinic at Georgetown, so when I graduated I went to clerk for a judge and then I went to be an assistant public defender. I had my son in my late 20s; he became a priority. I left the public defender’s office and was involved in a civil practice. And then I went to work for a local campaign for a woman state representative. She was a very progressive woman, and I liked the work. I’d been involved in some community initiatives, so I had some experience. But funnily, she decided to run for a different office, and so I ended up running for her office. I ended up in the establishment politics.

In a way, motherhood was a factor. I looked at my own child, and I felt like I could give him the love, the guidance, the education, the health care, what he would need to have good opportunities in life. But then I looked around at my community, and I thought, Wow, there are so many parents who are struggling, kids living in poverty, and I just said to myself: Even if I give my son everything, he still has to go out into the world, and there’s a lot that isn’t right. Every kid deserves the same opportunities to succeed. That was my biggest motivation to run.

And when I was elected, I followed through. I really focused on children; I was a very serious advocate for prenatal care, Head Start education, [preventing] child abuse. I spent just a lot of time on children’s issues. Now, both men and women care about these issues—at least in the Democratic Party. But back then, there’s no question whatsoever that the women gravitated toward these concerns—child care, child abuse, education, even the health care. It’s not just because the women were mothers, though that’s part of it. It’s that men gravitated toward the committees where they could raise money. It was about power. The men loved taxes, infrastructure, the appropriations committee. They loved the appropriations committee. I spent my time on the health and human services committee. That was better.

I ran for Congress in 1992, but I lost the election, and I really dropped the idea of ever serving in Congress. Eventually I went home and became the mayor of my city, West Palm Beach. I was mayor for eight years. And by the way, we’re just across from Mar-a-Lago. Candidly, I didn’t think at all about running for a higher office ever again. I enjoyed local government. I ran the city; I could get up every day, and I used to tell people it was like painting, like I had this canvas to fill in. Every day you have so many opportunities to help people. I loved it.

I ran and I won. And let me tell you the best part about running is winning. It’s the best.

But I did end up running for Congress for a second time, obviously, because a fluke happened. In the 2010 election, one of the congressmen in my area, who’s a great person, got defeated by one of the kookiest people in the world. I should be careful with how I say it, but he was just out there in a bad way. And then there was no one to run against him! I got really fired up. I was like, “This man cannot represent us.” In the middle of the race, Florida was redistricted, and this man ended up running in a lower district. After all that, I didn’t end up running against him. But it was an open seat then, and I ran and I won. And let me tell you the best part about running is winning. It’s the best.

Getting set up in Congress is hard; hiring the staff, setting up the office. Do you know how many times I got lost in the tunnels here? A lot. Usually someone would have to come and find me to show me out. I got elected in a class with a bunch of women, and five or six of us became immediately best friends. We’re now in our third term. It has brought a lot of joy to this job. And it’s not an easy task. You’re away from your family. You’re away from your friends. It’s a different world—Washington, D.C. And now, as a Democrat, it can be a very difficult place.

We’re from all over—one from California, one from Illinois, one from Massachusetts, one from New Hampshire, one from New York, and one from Florida, that’s me. Five of us live in the same complex. We hang out on the floor. We go to dinner a couple times a month. We do a lot together. We help each other. These women are my support group. We text all day. Since we were elected, we’ve always coordinated our outfits to wear to joint sessions of Congress. I don’t know why we do it. We’ve always picked a color and we all wear it. When President Trump scheduled his first congressional address, we planned to wear white. And then Susan Davis, a congresswoman from California, said, you know what, we should all wear white, all the women. I circulated a memo to our caucus, and that’s how that came about. We were so distressed by the president and his administration, and the actions they’ve taken, especially as [they affect] women and children and families. We decided that we still wanted to be respectful, as difficult as it is, but we wanted to show that we don’t approve and that we’re still fighting, like the suffragists did. No, we’re not going back.

We decided that we still wanted to be respectful, as difficult as it is, but we wanted to show that we don’t approve and that we’re still fighting, like the suffragists did. No, we’re not going back.

The wearing of white was very symbolic, but behind the scenes, we’re doing everything we can to make sure we hold on to the progress we’ve achieved. I promise, we’re working. I grew up in a time when Roe v. Wade was not on the books. I had friends who were almost killed in back-alley abortions. I grew up at a time when women couldn’t gain access to contraception, when women couldn’t even get credit cards [without] their husbands’ permission. When I was a kid, I remember sitting and crying at my brother’s little league games because girls weren’t allowed to play. I had a good childhood, but it was a very different time. When you understand everything that women have had to fight for, that women have worked so hard to get—the court cases, the laws, the political action, and so forth—you don’t take it lightly. And we still don’t get paid equally, we still don’t have the family leave policies, we’re still missing so much; there’s a lot of work to do, so we can’t afford to go backwards. And it’s a real threat now. It’s a real threat. I know many young women are distraught now, and I want to say they’re right; they should be. But we can’t go inside and hide. We need to be brave. And we need to fight.